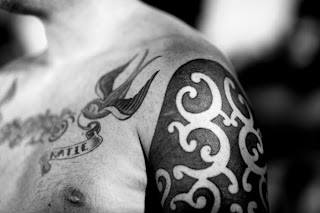 Gallery Raw called for submissions for an exhibition to be held for the month of October to celebrate Mens Health Week. I had an idea for a shot and I only needed a heavily tattooed man to pull it off. Work provides me with access to many fit young males and I only needed to ask about until I found one with the right Tatts. When asked if he would be interested in posing he originally hesitated, but it didn't take much to convince him. A few days later I popped around to his place and with his lovely wife holding the reflector I took 6 shots of him. I also took another 6 shots of them as a couple. This shot was the first taken and was the image I had envisaged. I was in and out of their hime in about 20 minutes. I converted the image from Raw to Jpeg and tweaked the sharpening. I had it printed as a 20x30 inch metallic paper print thru Digital Works in Victoria and had it mounted and matted thru The Framing Game at Charlestown. The black matt was not really black enough, so I had it matted with a black linen finish matt and it looks great. It has been hung at the front door of Gallery Raw. I am really happy with it. It is the shot I envisaged, the print came out really well and the mounting and matting is really well done. I love it when it all goes as smoothly as this shot.
Posted by Nammo at 2:06 PM No comments: