Not that the last one was unhappy!  Just a commonly heard salutation at this point in time.
I know I've said it quite a few times in the last 6 days.

So 6 days in what have I achieved?   Well not a great deal I must say.
New Years Eve was spent with the boys. Abundant food, great company and a top view of the Newcastle fireworks. Home at 3am after driving some of the youngest nephews friends home from the city.  All "P" platers there are rules about who can be in their cars after 11pm.  So I drove 2 to their cars and another 3 to their homes.  All totally sober!  Bed at 3am and a 5am phone call slowed me down for New Years Day!

Back to work a couple of days later and a massive clean up of the office took place.  Just need a nice armchair and a few more framed photos and I am done!

I had a bit of a cleaning frenzy this morning, although that thankless and never ending job is......well...... never ending!!!   I did make cupcakes this morning too.  Outside needs an army of workers to make right!   Yesterday afternoon, after a blistering hot day, I mowed for about an hour and haven't scratched the surface!  I also installed another compost bin, and bought two more,  just to deal with the lawn clippings.   Did some weeding, but no planting.  I need to plant some more stuff  but I am space poor until those WONDERFUL NEPHEWS of mine (yes, I do mean you Nic and Russ)  fill the three new raised beds I have built.  Nic goes back to Fremantle mid week and Russ starts his first ever job tomorrow, so I am thinking they need to get their act together .......... tomorrow afternoon, tuesday at the latest!!!!

Not sure what to plant this time of year.  I planted 5 different varieties of tomato and all but the Cherry Tomatoes were eaten by bugs.  I don't use and pesticides.  If I see bugs i pick them off and if I had chickens the bugs would make for a nice treat..... but I don't have any chickens.  The beans and capsicums are coming along nicely. The silverbeet has seen better days, but has provided a lot of leaves thru the season. The last of the first run of spring onions came out yesterday, but versions 2 & 3 are progressing nicely.  I'd like some pumpkins, not spuds though.  Beans and peas are always handy too. Caulflowers are hard to keep bug free, but broccoli is tops!   I still have a tiny bit left in the freezer from last crop!  MMMMmmmmm  even though it is a zillion degrees out there just typing about it makes me realise how I need to be out there digging, mowing and watering rather than in here typing.

Best I get moving then, but as always a photo.

This one is the first I took on New Years Day, when 2013 was about 3 minutes old!  I put it on flickr and it made explore!   If you don't know what that means it is enough people looked at the shot, made comments or added a fave star that it was one of the 500 most looked at images on a given day.  So here it is........  fireworks. 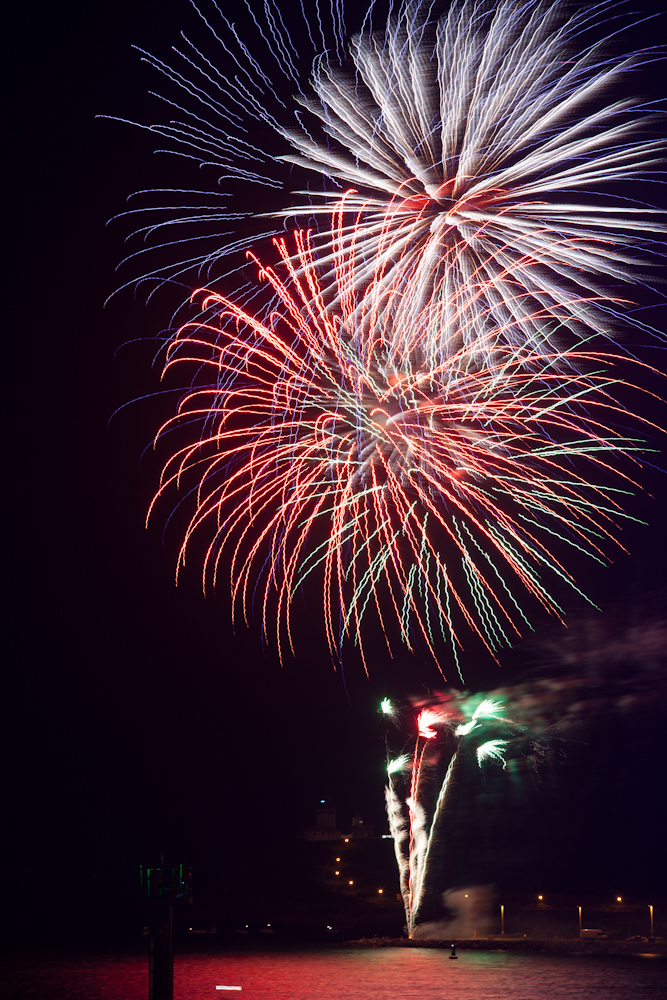