HAHAHAHAHA... just found this had been sitting in "Drafts" for ohhhh about 11 months!  I'm a silly billy!!!
For those of you who have read along before, welcome back.  For those who are new allow me get you up to speed, pronto.

I love photography, it is my only real creative outlet.   I also have a home studio and a love of controlled light photography, Off Camera Flash or OCF to the newly initiated.  This all started with a photo of some dead flowers against a black backdrop taken with a single Canon Speedlight..... off camera.   I've always been a canon user and on this occasions I triggered the single Canon 580exii flash with a Canon St-E2 trigger on a coffee table in my loungeroom.  The backdrop was a roll of black gift wrap paper.  I was gobsmacked at the result.   Loved it,  and an addiction had began!

Fast forward 12 months and I had garnered together a vast array of Canon gear.   4 x 580exii flash heads and 2 x 430exii's as well.  I'd moved from the St-e2 to Pocket Wizards, so I have 6 x tt5's with a tt1unit and an Ac3 controller.   The madness of gear acquisition continued.  A Sekonic light meter with the pocket wizard module replaced the Sekonic light meter without the pocket wizard module!    Backdrop stands, light stands, cold shoes, bungees, clamps and.... the Modifiers!   I bought some Godox softboxes. Big gridded umbrella octos and some rectangles with grids.  I couldn't get a strip soft box for my system, but I made up 4 strips that I clamped on the sides of the rectangle soft boxes to make a strip light that I could adjust simply by moving two bull clips.   I even bought a cheap shitty boom arm and it was ..........really cheap and shitty!

I've totally impressed myself with the quality of light I have been able to capture with this set up...... but then one Saturday afternoon a text from Josh changed everything.  For YEARS I had wanted, no coveted, even lusted after Elinchroms.   Josh, to his credit, consistently reminded me to not spend any more money until my gear couldn't do what I wanted it to do, but my gear had never left me wanting.  Still I had a crushing desire to own an Elinchrom kit.   I'd only ever used them a few times.... mostly I had been Joshy's VAL (voice activated light stand) on a number of his shoots.   He used a ranger system,  battery operated heads as bright as the sun!!!    In fact he had left his gear in my studio some months before when his work took too much of his time and shooting became something he no longer had time for.   But I digress.  Josh texted me with a link to a bloke selling off some older elinchroms SUPER cheap.  SO cheap I had suspicions about its provenance.  I made contact and my fears were instantly allayed.  This dude knew his stuff.  He spoke confidently about the gear and what he believed was a fault, but for the price I was IN!   I contemplated a late night drive to the Central Coast to meet up, but decided a Sunday morning leisurely cruise would be a better bet and in the morning I was glad of that decision. The windy road to his place was bad enough in daylight.  It would have been horrendous at night!

So I scored a three head system with two softboxes and a reflector, a skyport controller, lightstands,  spare bulbs and a manual for bugger all dollars.  Josh was concerned that I had bought a lemon, but all heads work and the modifiers were in perfect condition.   The huge octos from his ranger system all fitted the system I purchased, which is the beauty of the Elinchrom system and... the big win...was that Josh HAD a strip softbox!  Albeit, without grid.

So the fun continues with 240V lights instead of battery powered speed lights.   I'm not savvy enough to see the difference, if in fact there is any!   I do enjoy the set up. It is super speedy and the variety of softboxes, brolly and reflections I have is stunning.

Its one and only downside is that it is not portable, as in outdoors.   But I retained some speed lights and Pocketwizards in case I ever needed to take it outside.

Sooooo wanna see some Elinchrom lit images?  I was hoping you would say yes! 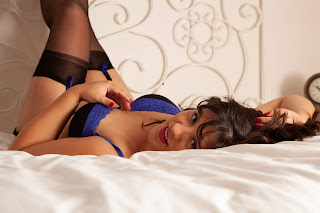 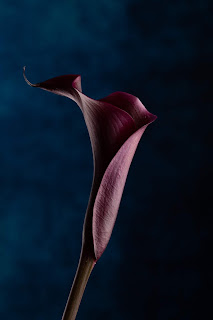 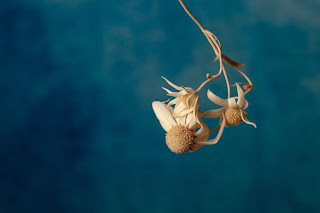 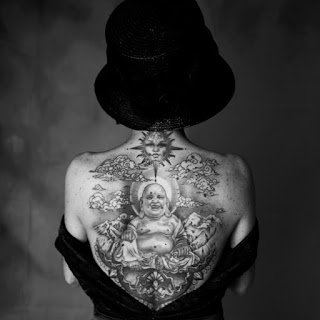 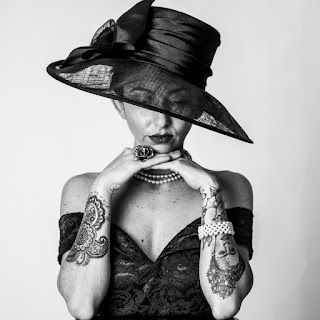 Some time ago..... ok, it was actually in the last Millennium, I did a short upholstery course and really enjoyed the string spring thing.  I did some drop in seats for a set of dining chairs and was quite chuffed with the result.  Later I did some stools and simple decorator items.  Then...... nothing.  Well nothing until about 3 months ago when I recovered an IKEA ottoman in fake cow hide.  Much as I liked the look, my fabric choice was poor. I purchased fabric with one way stretch and when stretched over the ottoman, the resulting look was.... less than perfect.   Ridges and lines were visible, it was a poor job. 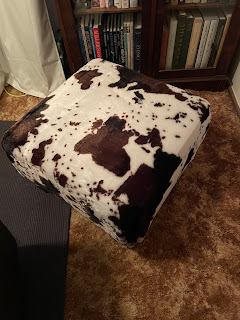 So on Sunday I zipped to Spotlight and bought 1.5m of a Jocelyn Proust fabric.  Lovely heavy weight cotton with a bold blue and orange print.  Made even more delightful by being 40% off. So the piece cost me less than $25.   The colours suit the loungeroom with a solid blue Layzboy armchair and a bright orange 3 seater.  The plan was for the ottoman to tie them together. 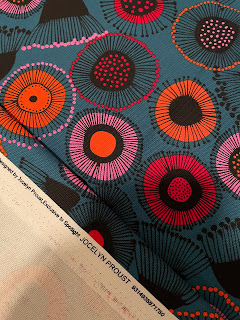 The construction of the Ottoman made it very difficult to staple fabric evenly along two sides of the piece. I was using a basic lever Arrow T50 Staple Gun, but with insufficient timber for leverage, the staples weren't even and uniform or even well placed.    I decided it was time to lash out on another piece of the Ryobi 18v ONE+ Range and purchased the Cordless Stapler.    Not one for reading instructions it was very easy to load and set the depth of the staple and .....  well I got stuck right in! 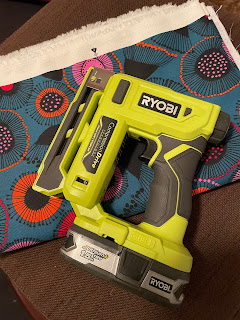 Half way done with 2 of the feet back on.   The whole process took less than an hour. I didn't time the process, I calculate an hour because I was listening to Schiller "Live in Berlin" on UE Boom and I didn't get all the way through before the job was done!!t 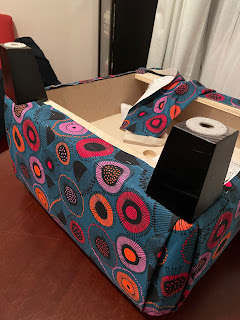 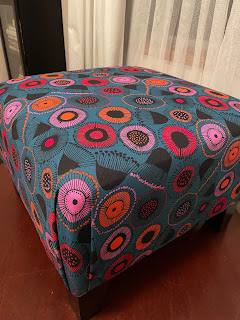 Really happy with the outcome.

What will I staple next????