Back to see the Doc again today. Still have a problem with iron, or rather the lack of it. I had the usual test last thursday and got the call to come on it. Everything we good, or explainable, except the iron. There is some issue with my blood glucose levels, but the blame there can rest squarely on the shoulders of the Easter Bunny! Everything else is good ... except iron.


Whilst not being a rabid carnivore I always thought I ate enough red meat as I haven't really had an issue with low iron before the Thyroid Cancer.  Even after the partial and total thyroidectomy there was no hint that I was anaemic. In fact I was amazed at how well I felt after all three operations. None of the dozens of blood tests I had back then showed any issue.  That was back in August 2012.    Since the Radioactive Ablation in February 2013 there has been a consistent problem with energy, or rather the lack of it, depleted iron levels and a low blood count. Beginning September 2013 the Doc started to hunt for the answer and since then I have had every test known to man to isolate the issue. I have been tested for pretty much every kind of cancer and they have all come back with reasonable results, but with nothing to flag an iron issue.

As part of that ongoing investigation I was referred to a gastric specialist in January.  In February he, amongst other things, implanted a camera in my stomach while I was under general anaesthetic to rule out bleeding ulcers or coeliac disease as a reason the the iron problems. Again everything came back normal and whilst normal is a good thing it doesn't help when I can't lift my head off the pillow or walk any distance without having to rest and recover.  The gastro bloke reckoned I wasn't consuming enough red meat and so he gave instructions as to how much red meat I needed to consume before the next round of tests.   I have now undertaken a "meat feast" where I have had red meat at least once a day, every day and am also taking iron supplements.   Those results caused the call in from the Doc today. Yes, the numbers have improved a little, but I am still way off "normal".

The effects of the iron deficiency are becoming a real issue. Gone are the days of an afternoon spent mowing. I can now do about 10 minutes without having to stop and rest.   So if the iron issue isn't a new cancer, coeliac disease, bleeding ulcers, or lack of consumption what is causing the problem??? I asked if it was from being made Radioactive and so Doc is now turning his mind to that as a cause.

Thyroid cancer does affect a lot of people, but it is not high profile and as such there is little information available on the net in Australia about it. If you were to search the Australian Cancer Council website you would struggle to find anything more than a passing reference to Thyroid Cancer. Searching worldwide does glean a little more information and today I think I hit pay dirt with a couple of lines on an America Thyroid Cancer Survivors website. The following words were buried in a link about Radioactive Ablation under the title "Other potential side effects of RAI" (RAI being the acronym the americans use for Radioactive Ablation). Anyway it said... "Temporary or permanent decreases in blood cell counts can also occur. " YIPEE!!!! Finally a possible reason the lack of iron. Today one of the things Doc said was that my blood count was finally on the rise. So hopefully with some further research by the qualified one ( I rate my Doc, he rocks)  there might be an answer coming.   He is also trying to organise a transfusion for me of chemically manufactured iron (as opposed to a blood product).  This might take some weeks or even months to arrange, but the process has begun.

This may well have been the cause of the iron issues.  Not really the case of what doesn't kill us makes us stronger!!! 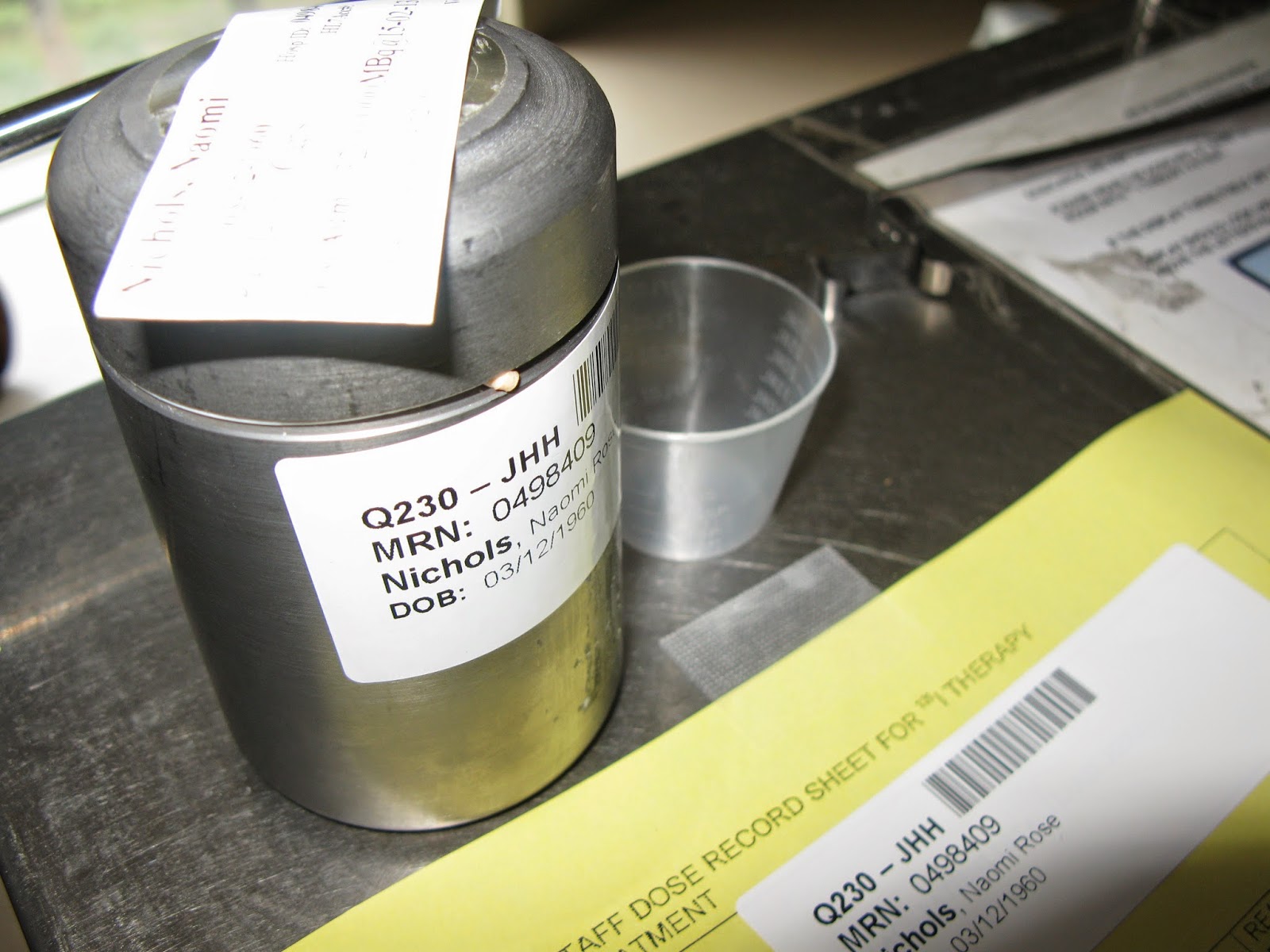 Moving house, not unlike moving mountains!

My sister has sold up the house she build over 20 years ago and so, as you do when someone else wants to move in, you pack up all your possessions and move on.  Her problems commenced when her house sold the day it went on the market to the first people who saw it and she wasn't able to find a house she liked!  So instead of moving from one home directly into another she moved in HERE with her youngest son AND cat AND dog!!!

Now I don't have an issue with that, in fact I think it might have been my idea,  but where do you put 20 years of accumulated "stuff".  The garage here is full, the garden shed, similar, so we have had to move her "stuff" into a storage unit.  6x3m is the largest we could get...... and it filled very quickly.  The nephew understands the concept of Tetris and maximising every spare millimetre, so he worked his magic moving the boxed material.  Even so that space filled early on the day we were moving the big stuff, the furniture.  So back we went and signed up for unit number 2.  They had no more 6x3's, but I didn't think we would need that.  We were offered 3x1.5m, 3x3m or a rare drive in 3x4m.  I chose the 3x4 thinking that drive in would make it easy and the spare space would be a bonus.  Ha!  There is no spare space!  The 3x4m was filled in two deliveries and that included stacking bookcases on top of bookcases!!!

The good news is sister has found a house she does like and the wheels are in motion for a super speedy settlement.  So in about 6 weeks (although I am hoping for 4 weeks)  the whole process will be reversed.  Truckload after truckload of furniture and boxes will be taken OUT of the storage unit and into the new home.  The new house is nice.  The gardens need some loving, but I might acquire the rear yard for more veggies! The house will hold MOST of what she owns, but I am lead to believe that there will be a rationalisation of goods.  She will have a dedicated sewing room too. YAH!  So no more sewing machine on the dining table.

Moving house is stressful and expensive, but when the dust has settled she will have a beautiful home.

Watch out for the "Operation Rationalisation" coming to Gumtree, eBay and a garage sale soon!  Who needs a pogo stick and some stilts?

Now these photos come from a phone and were shot in almost total darkness as they were snapped as we were doing a quick drop off this morning.   I'll substitute better shots when I can.

Update:  added 2 pics from the second unit, the hi rise! 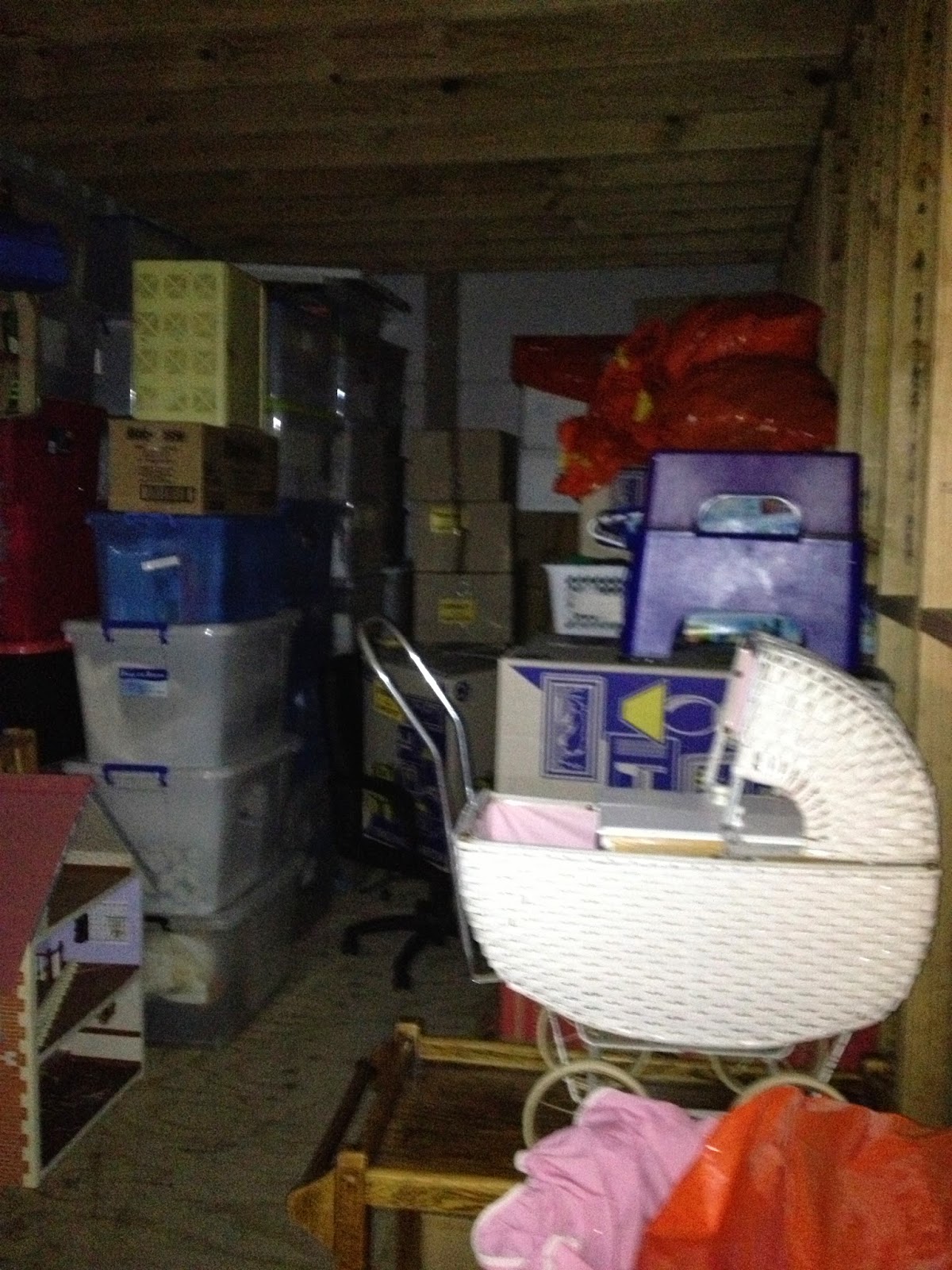 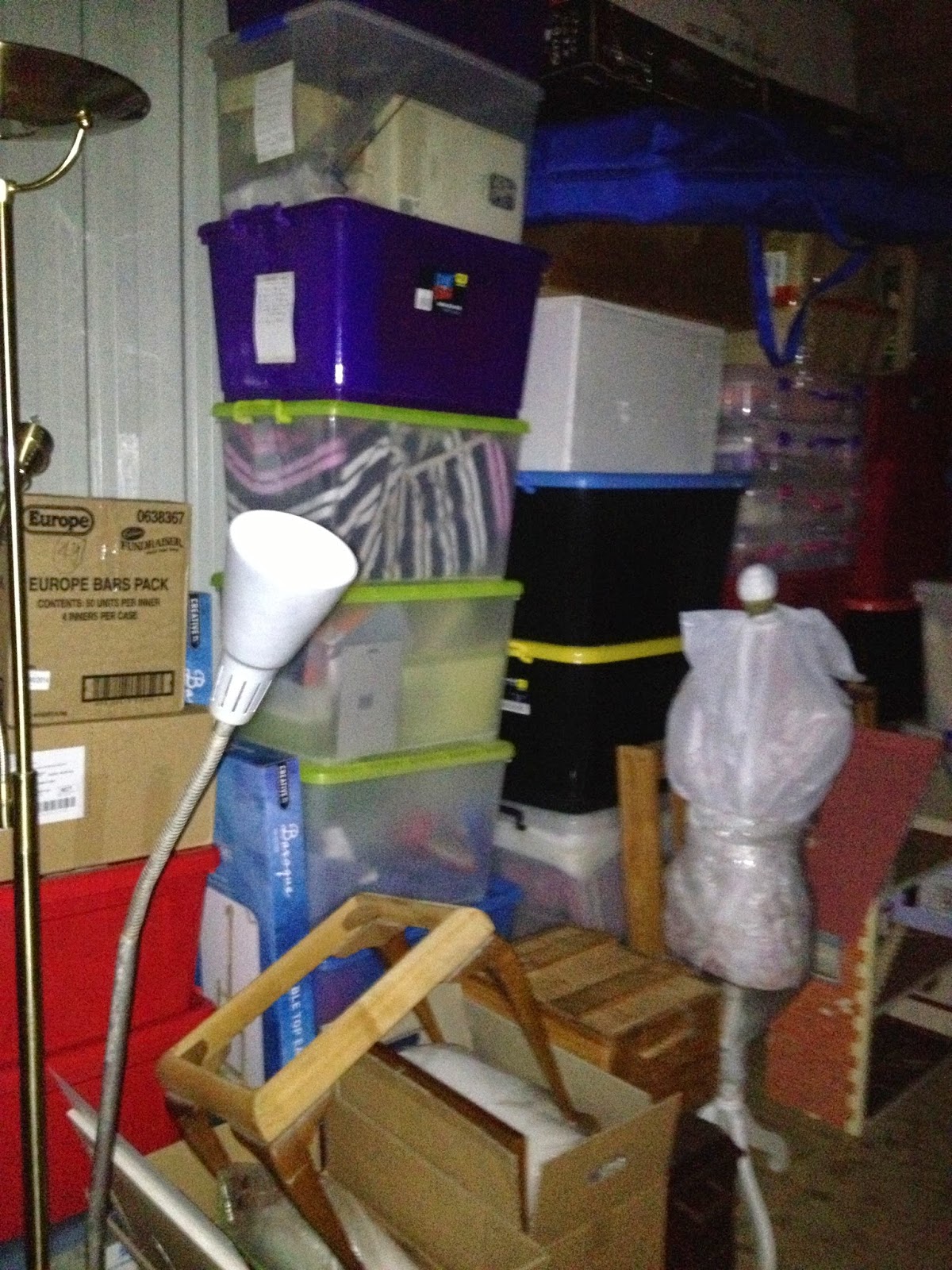 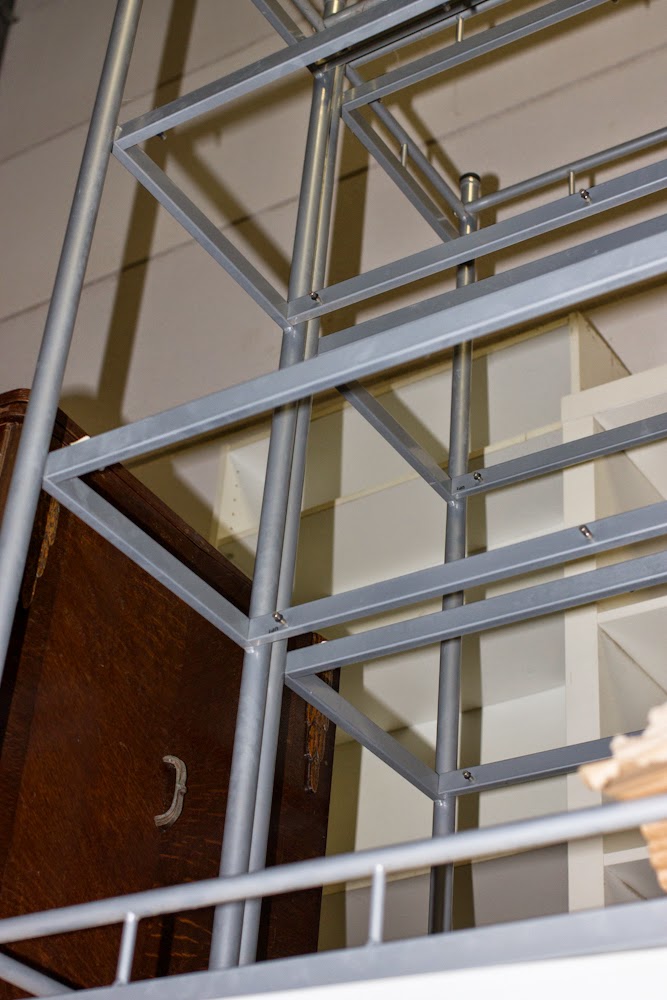 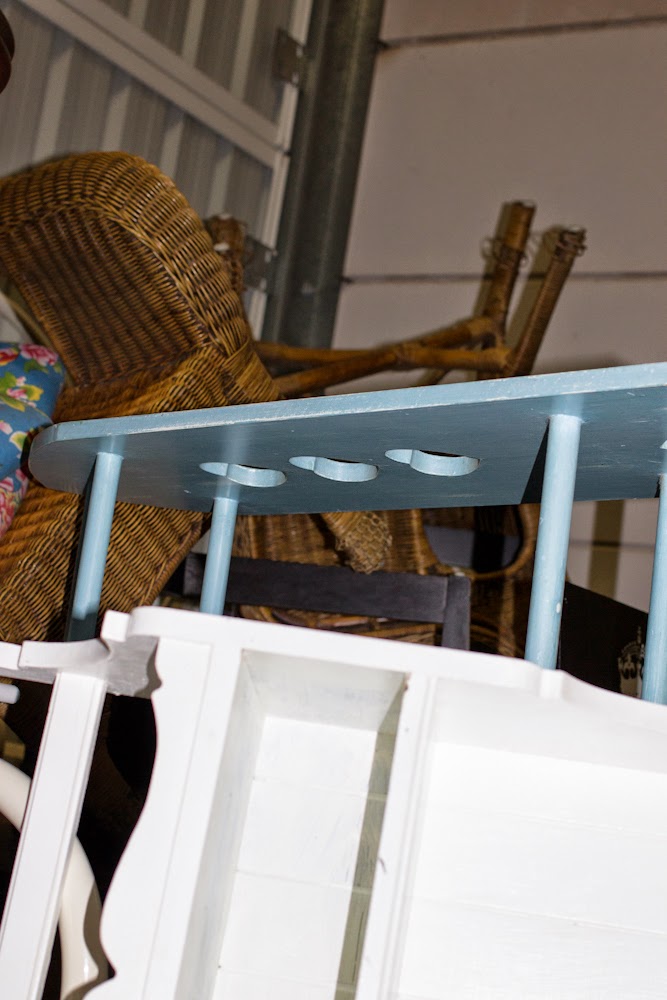