I should have stayed home!!!


Yep, I shoulda stayed home this morning.  I even worked out a shonkey plan to keep busy to stay home, but it didn't pan out so at 9am I was standing at the entry of the Camping and Carvanning show waiting for the gate to open.

Back in 2012, just before I got crook, I bought a new tent.  It had been many years since I spent my weekends sleeping under the canvas... but the time had come to get back into it.  I was spoilt in the 90's and the 00's by Rod who will only sleep under 5 stars, not a galaxy!  I always liked the camaraderie of the caravan park,  something sorely missing from your 5 star resort, so my mind was turned to prepping for retirement and canvas was again considered.    But as you know I got crook and the tent has never been unpacked.  After due consideration I decided I wanted a higher level of comfort and began to consider my options.   The pop up Avan is most likely my ultimate purchase, but with a base price of about $24K ($32K when optioned up) and a new car needed to drag it about, it is not an 'now' option.

After doing a lot of Gumtree and Carvansales dot com type research I warmed to the idea of a camping trailer, especially the hard floor camping trailer.  Weighty, but still able to be towed by a Laser and reasonably easy to erect.  They seem to hold their value well so I headed to the Show to look at new models.  PRICEY was my first response and as I used the winch to open and close one I thought it was probably something I could do on a regular basis.  $12k was beyond my immediate budget and half the price of the base Avan, so I wandered the aisles of the show looking for alternatives.   Manufacturers and retailers had their best on show and the prices reflected that.  I just wanted something simple and reasonably priced for travelling alone or with one other, but couldn't seem to find what I sought.

Then I lucked across the "MARLIN" brand camping trailer.  I watched a demo of one being set up and thought it looked very easy.   There was a few "older" people looking at them.  When I say older, I do mean my age, but no one wants to admit that!      As I was standing inside the screened room of the larger unit a fellow prospective purchaser pointed out that there was a smaller unit.  He all but dragged me over to see it and it looked pretty good.   In fact it looked too good to be true!   I listened as the salesmen talked to others about their product and the old bloke pushed me to try and open one.   One handed and 40 seconds later it was open ready for the floor to receive 4 pegs.  It was done!!!  One pole inside needed to be extended and slipped into its holder, the awning was already attached. I could reach everything easily and I was super impressed.

I hung about for a while, but eventually headed off with a lot of info and a credit card burning a massive hole in my pocket!!

Once home the research began.  The net is amazing for this stuff.  I sought independent reviews and found a couple of blogs where people were travelling using this camper.  I also read trade reviews and comparisons and read nothing negative in any of them.   In fact all reports were very positive.  I asked my blogging mate Rebecca Hamby for her opinion on camping trailers in general and this one in particular and she, as always, gave top shelf advice.  Having read all the net material, Rebecca's comments and and knowing they are produced in Erina I hatched a plan to hang off till another camping show in May and one buy then.  But that changed and I was back at the Show this morning waving the EFTPOS card about.

Again there was no pressure.  The sales dudes were both lovely.  They offered advice and answered every question easily.  After a bad night, I wasn't at my best so I headed for some shade, a cold drink and a bathroom, but I came back and paid my deposit and elected for an August delivery date with the ability to add more options between now and then.  You see I don't know if I need the extended drawbar or the Treg hitch or the vertical bracket for the spare wheel?!?!    I need to find out those answers and let them know BUT as they are at Erina I can zip down and ask more questions, seek more advice and change the specs.

So here she is, my newest toy.  Just need a name for her now!  Any ideas? 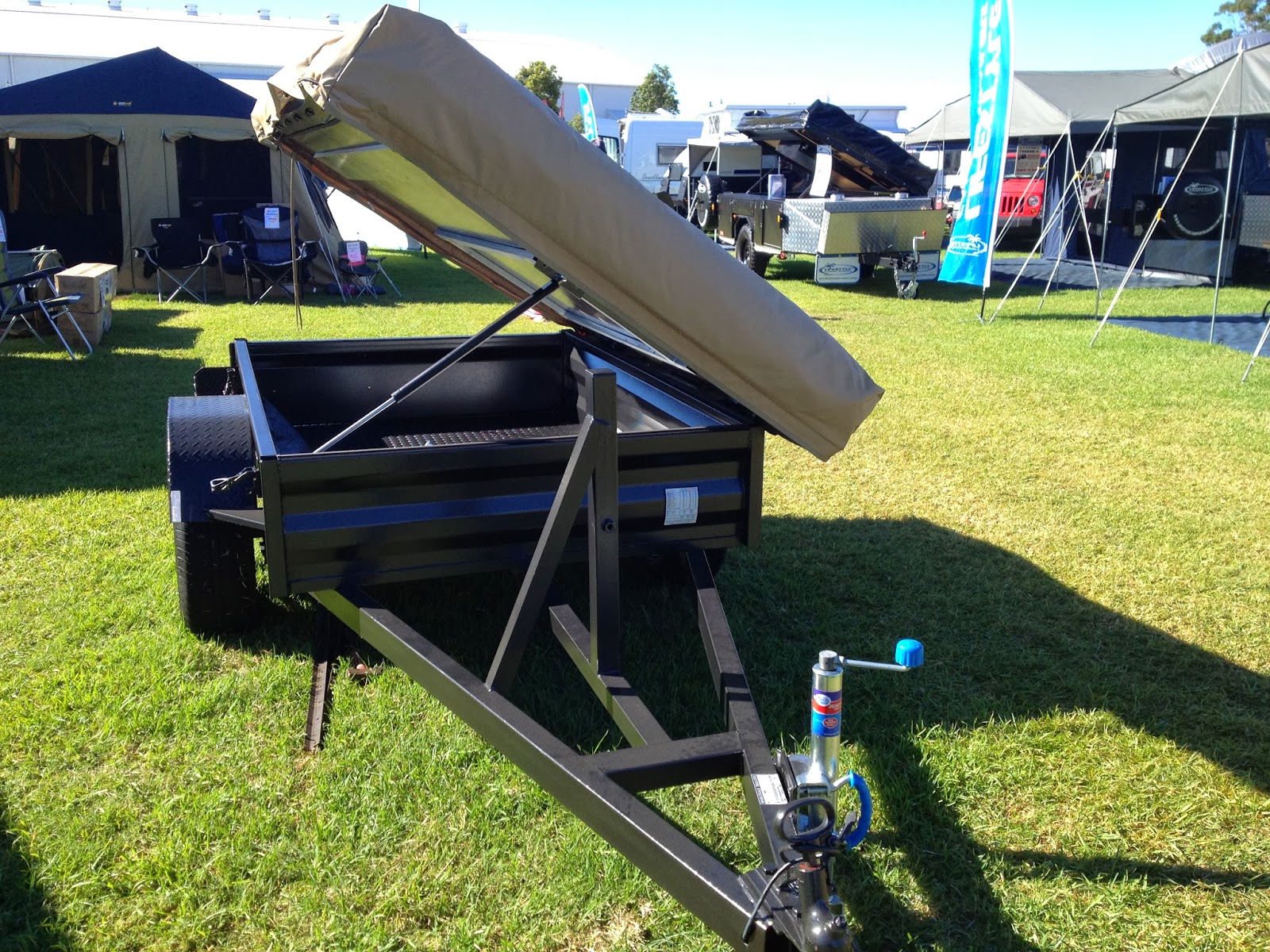 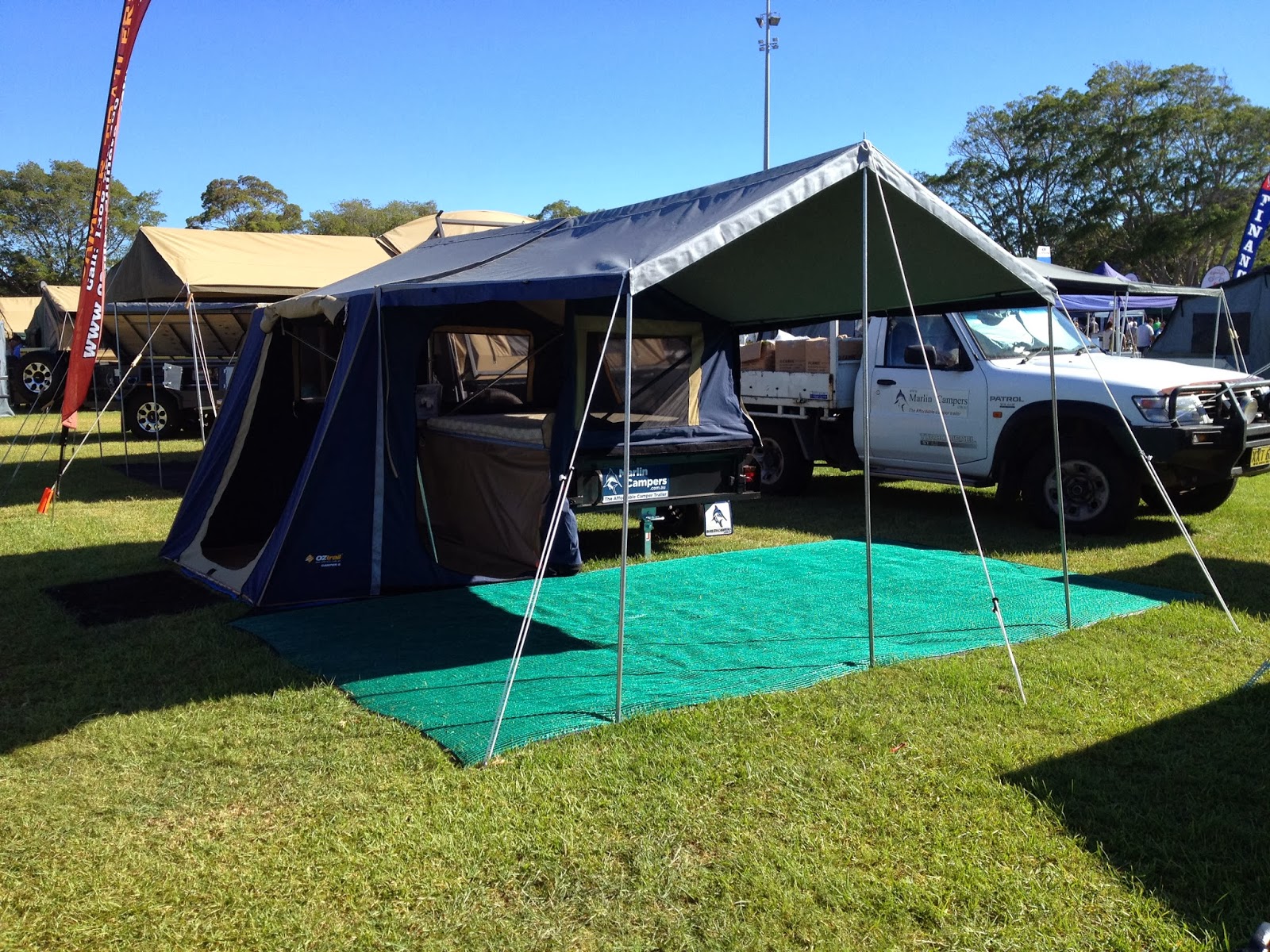 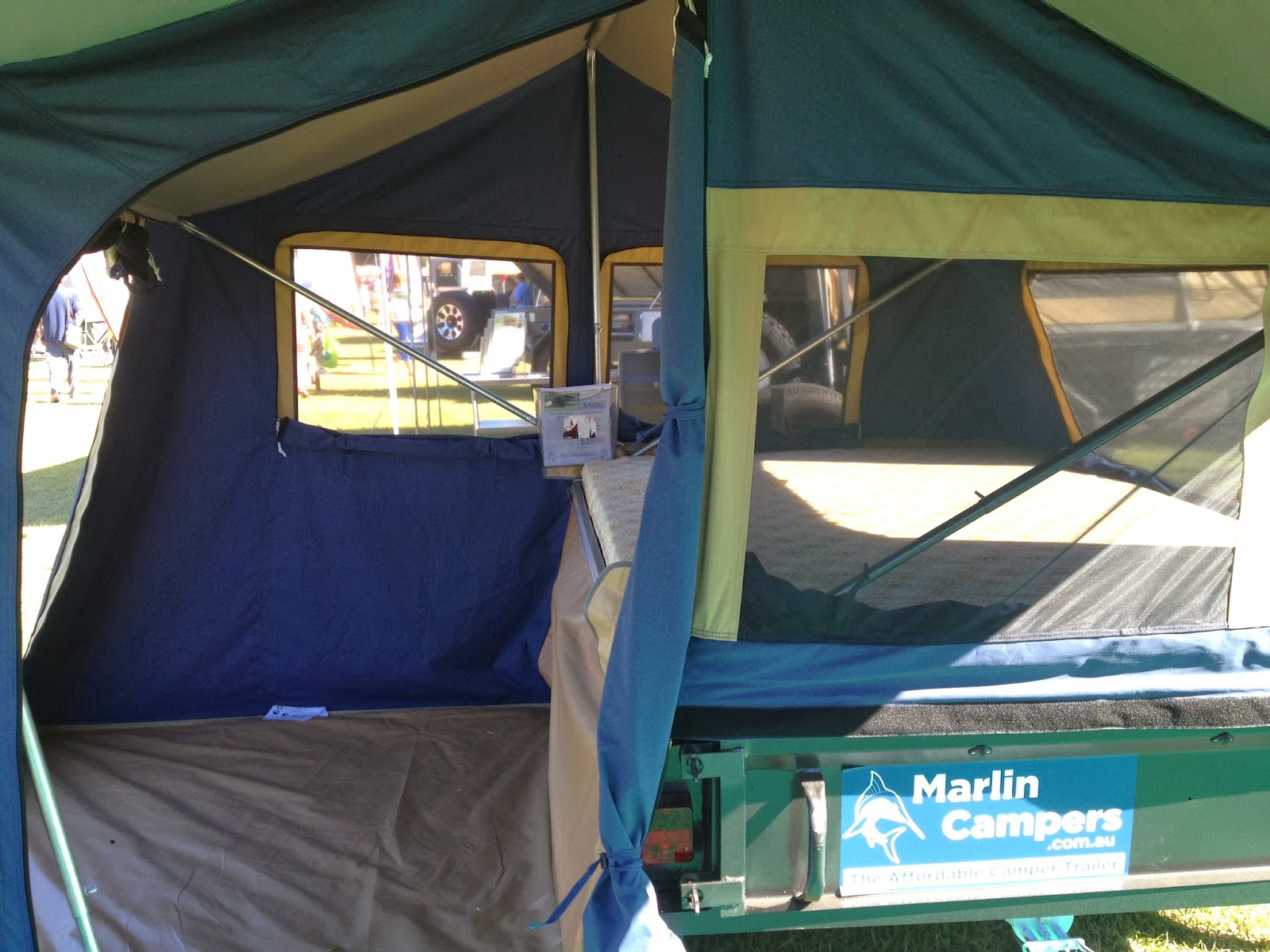