A garden full of goodness

Well I thought it might be time to do a veggie bed followup.

A couple of years ago I was given a Hills Adda garden raised veggie bed for christmas.  The Hills Adda garden are 120x90x30cm corrugated iron veggie beds that sit atop the lawn.  Yes, if you were wondering,  I am difficult to buy for and this was a complete surprise.   So with one bed assembled, filled and producing I thought I should buy another.  I had twin beds going for a couple of seasons and I really had the "growing your own" bug.  In 2013 I bought 4 more beds, so I had 6 in total and finally could rely on a reasonable crop of some items.   As 2103 was drawing to a close I realised Hills were changing the profile of the Adda Garden Bed I had to either jump or miss out forever on expanding the garden with matching beds.  Yes, matching IS important!!!  So I found three more matching beds and my garden of nine beds was complete.

The beauty of the Hills Adda garden is there is minimal wastage.   After assembly and before filling, the cardboard  packaging forms the base of the bed and ultimately kills the grass and then decomposes adding carbon to the mix!   The only bin items are a small plastic bag that the screws came in and two cable ties that held the 4 panel pieces together for transport.  Less than half a handful!!

So with 9 beds I began to look at crop rotation as a method of pest control and soil rejuvenation.  I'm seriously no expert but I do understand the concept.  Root crops should be followed by leaf crops.  Beans "fix" nitrogen issues so should follows plants that exhaust nitrogen in the soil.  Some veggie types will not thrive in beds with some from other families.  It's a minefield, but I am trying to implement a relaible and functional system.

I rarely use fertiliser.  I tend more towards enriching the soil between plantings.  Of course there are times, especially with high yielding crops like cucumbers and tomatoes where  a hit of thrive helps in the dying days of the plants to get just that little bit more out of them before they become compost.

I also avoid pestacides.  I try all the touchy feely "green" alternatives before ultimately removing a pest infested plant.  Soapy water, fish emulsion and cardboard cutout butterflies to name just a few of my oddities. I use chillies and marigolds to entice good bugs and bees into the veggies and use lucern in preference to snow pea straw as a mulching product.

I don't have a water tank, so I rely on rain and "town water".   I'd LOVE a tank, but I don't really have somewhere to put it so that it doesn't look like an eyesore.  No matter how much I water, a few drops of rain will yield a better result!  I think it must be the chlorine in our drinking water that acts to hinder some growth.  I do think I would have more produce with stored rain water tank set up.

When crops are at their peak I wander the neighbourhood with a baskets of excess produce and I often receive fresh eggs for gifted veggies.  Its a very gentle system.  There are only 8 houses in our street, so everyone gets something.   One lovely neighbour, new to the street, has no land for produce, so she has recently gifted me some beautiful art books.  Her late husband being an artist and his collection far exceeds her needs.  So win win!!

The nine beds are all numbered with the aim of making my sparse record keeping easier.  Actually the record keeping is a complete failure!  Growing right now are birdseye chillies, spring onions, carrots, 2 varieties  of tomatoes, corn, silverbeet, 2 varieties of zucchini, cucumbers, red runner beans, french dwarf beans, Rajan super hot chillies, baby squash, celery and capsicum.  There is also a vast array of herbs and some other chillies in pots.  This morning I planted 2 more varieties of beans, specifically as a legume crop to follow a brassica crop in bed 5.  I'm hoping that works well.  Fingers crossed!


As per usual some piccies as a thank you for reading this far! 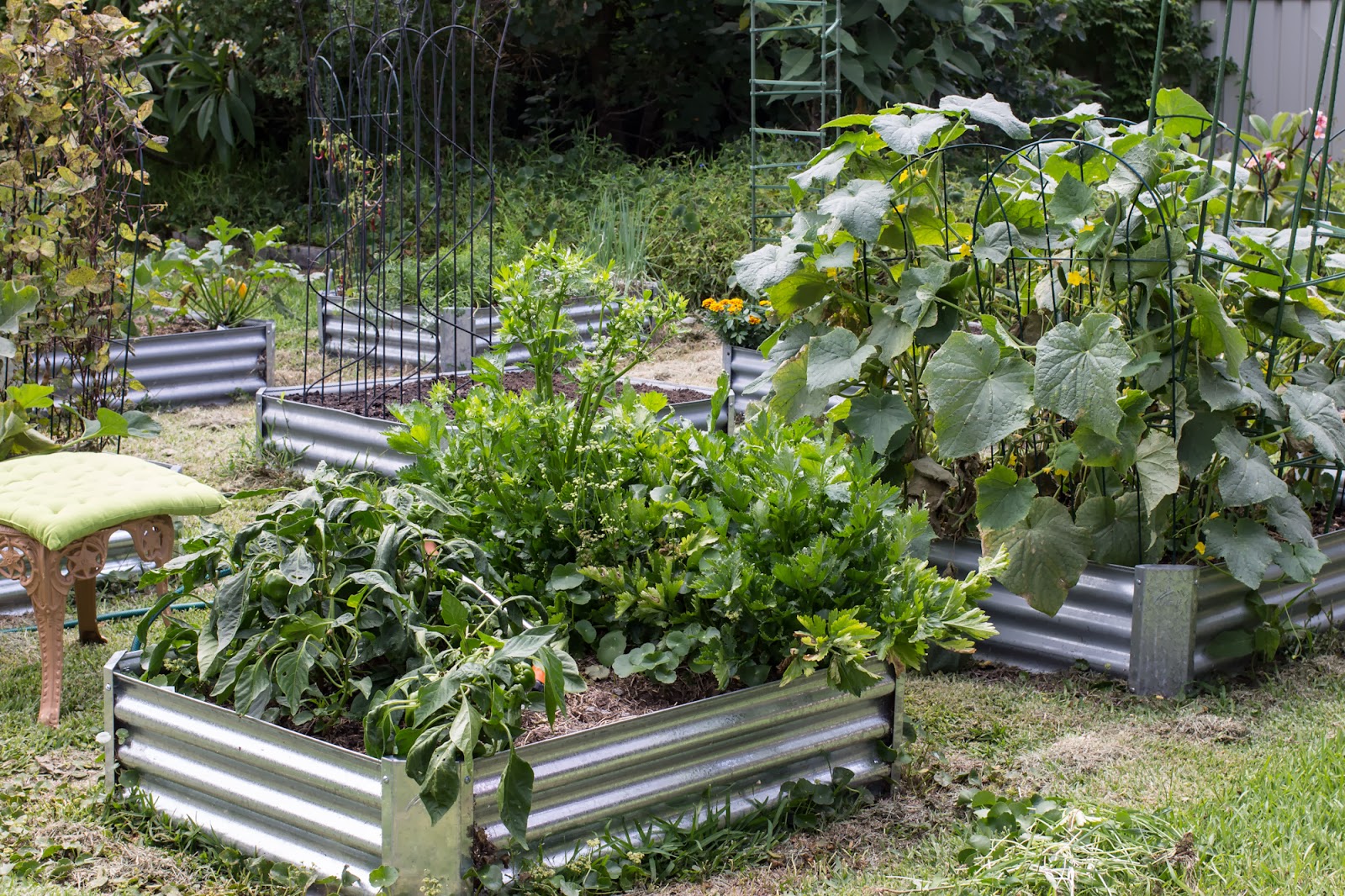 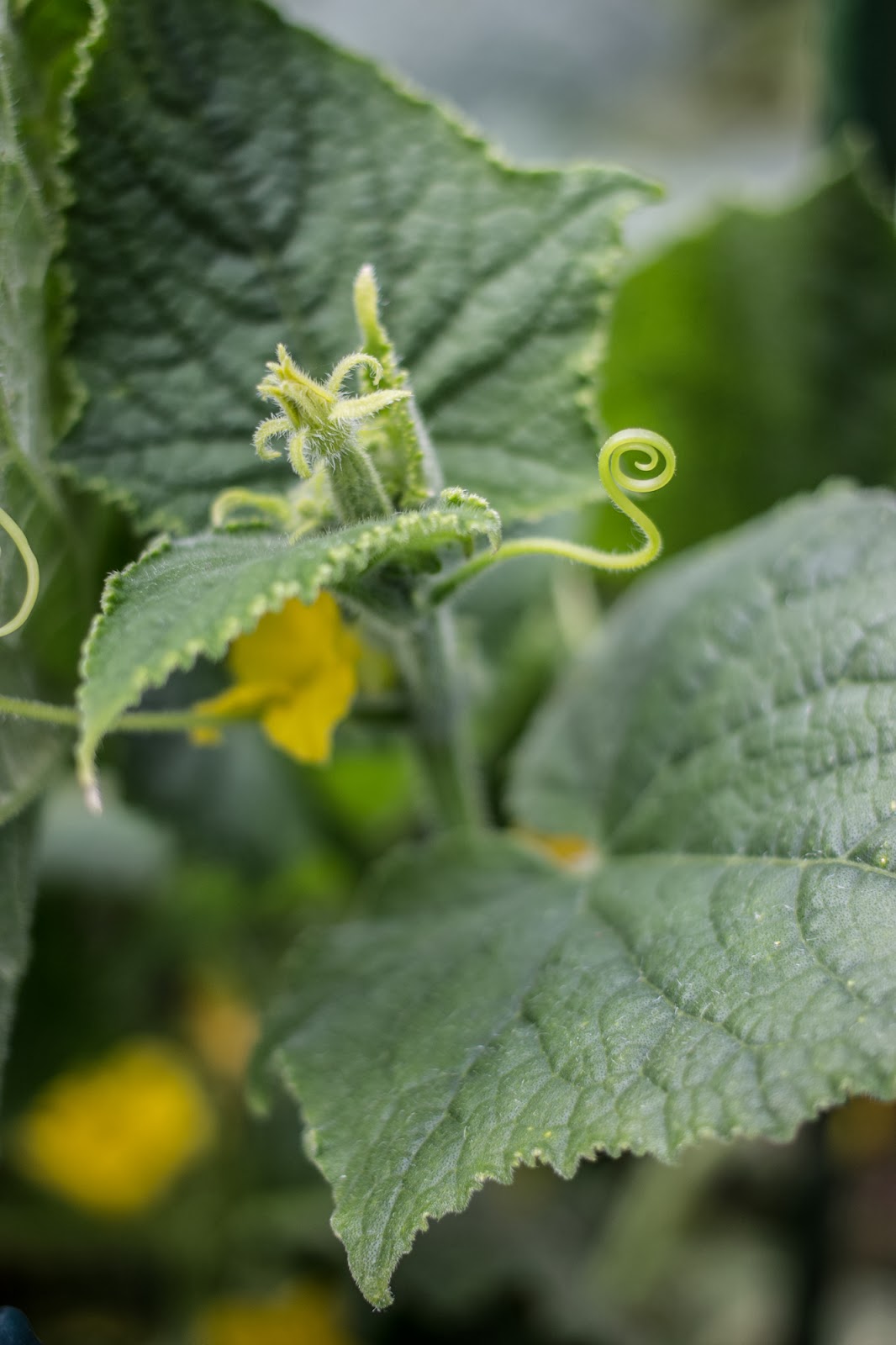 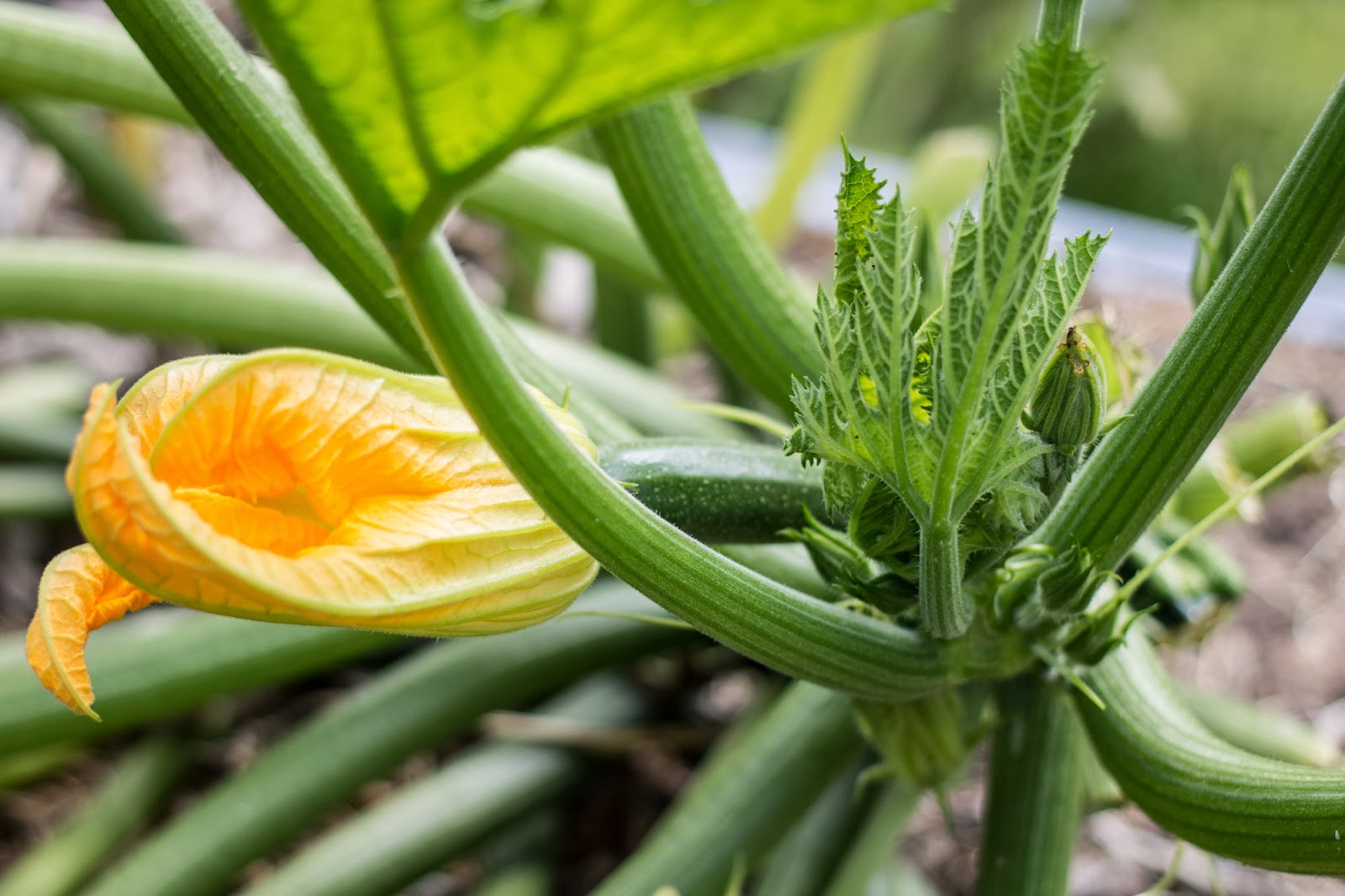 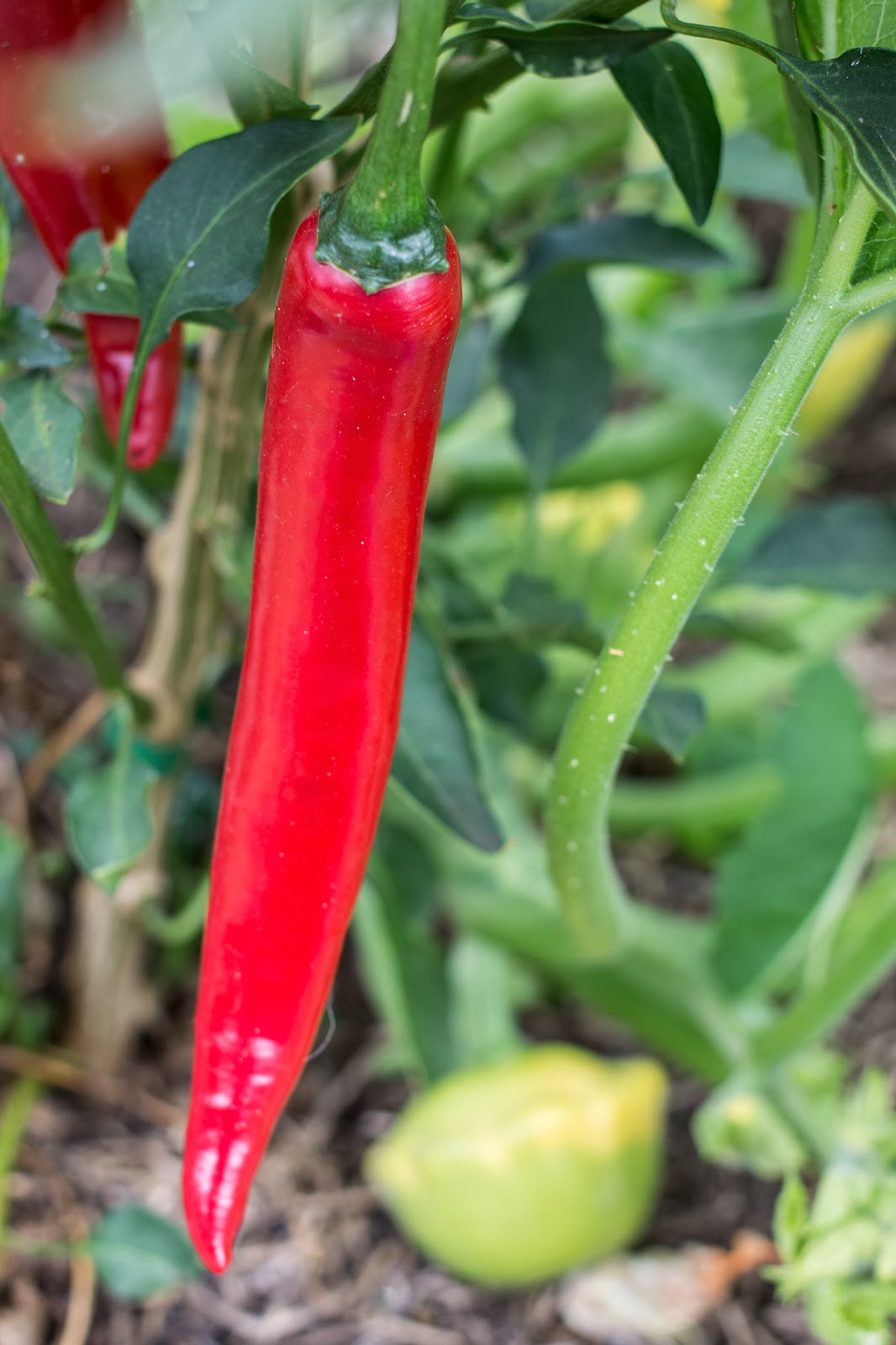 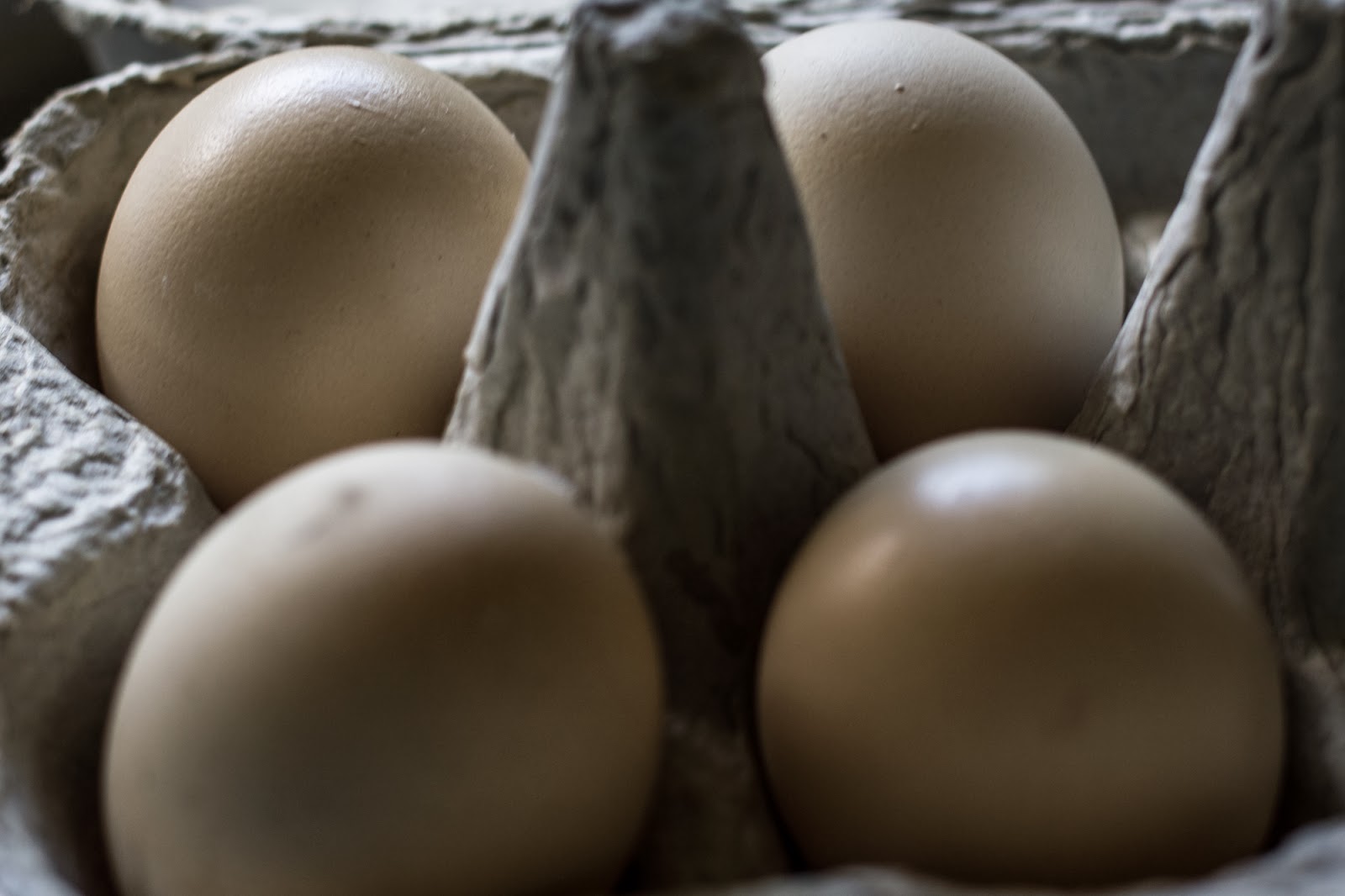