It was two years ago on 19 June that I had my first hemithyroidectomy.  It was, in fact, a right hemithyroidectomy and I had hoped it would be my ONLY hemithyroidectomy.   But this was not to be.  The frozen sections were found to be a malignant form of the cancer and 6 weeks later the very talented doctors opened up the original incision site and extended and straightened it for a total hemithyroidectomy.  So what's happened since then?  Well my treatment has continued and I now take 19 tablets a week to replace the now absent thyroid gland.   The levels of thyroid function are measured monthly and have been stable until this last round of tests.  So it is back to the specialist at the John Hunter Hospital to have that tweaked next month.  After both operations I felt well, although tired.  That hasn't changed.   I am happy and well, except for the constant tiredness.

Seems I have had an uncommon reaction to the Radioactive Ablation that occurred in February 2013 where by my blood count sunk.   This is being monitored a bit more closely and my blood count has risen in the last test, so I'm very happy with that.  The tiredness remains, but I have great faith that this will pass in time.

Apart from the two women I spent a few nights in hospital with, and have had no contact with since, and one guy from work who now works in Western Australia, I don't know anyone else who has been thru this process.  That may well explain why I have had so many people read this blog.  I'm guessing we are out there, but we have no way of connecting.    The United States has a Thyroid Cancer Survivers Group, but here ... nothing.   Even the Cancer Council of NSW has just a single page on Thyroid Cancer.  Yet when I was waiting for the Radioactive Ablation I waited nearly 8 months as they only do one person a week at the John Hunter.  So at least 52 people a year are treated this way in this region.

So what exactly does the thyroid gland do?  Well I had no idea, but apparently it makes makes two hormones called thyroxine and triiodothronine, but known simply as T4 and T3.  These hormones  are essential for every cell in the body to function normally and are delivered thru the blood stream.  Thus the drugs must be taken daily to do what the gland did before it ended up in a jar!

Lack of a thyroid gland has otherwise meant little change to me.  For the first 18 weeks or so I needed to keep the wound covered when outdoors to avoid dust and dirt and sunlight.  For that I used a variety of coloured silk scarves. Since then I have had to use sunblock daily to protect the scar and now two years on the scar is barely visible.   Also, I can no longer be either a blood or organ donor. Being a malignant cancer it has already escaped into my blood stream and will pop up somewhere else in my body.  That might happen tomorrow or it might not happen for a few years, but the Doctors have assured me it will happen.  So no sharing my blood products with anyone!!

If Medicare didn't exist in Australia the nuclear scans, biopsies, operations, radioactive ablation,  follow up tests and ongoing drugs would have made treatment for me highly unlikely.  Two injections I had in early 2013 cost over $1000 each!!  Luckily Medicare picked up that tab!!

Should you find yourself on the cusp of this diagnosis fear not.  There are great doctors out there, I know because I met a LOT of them.  Success rates are high as are treatment standards here.  Don't self diagnose, or google diagnose.  I tried it and I thought I had tonsillitis!   I did ask my doctor to take some photos of my specific cancer, but he declined.  He did say if I wanted to see the surgery there were examples on You Tube.  I watched them, but I did want to see my own lump!

If you are squeamish look no further.  Selfies follow, one for each op! 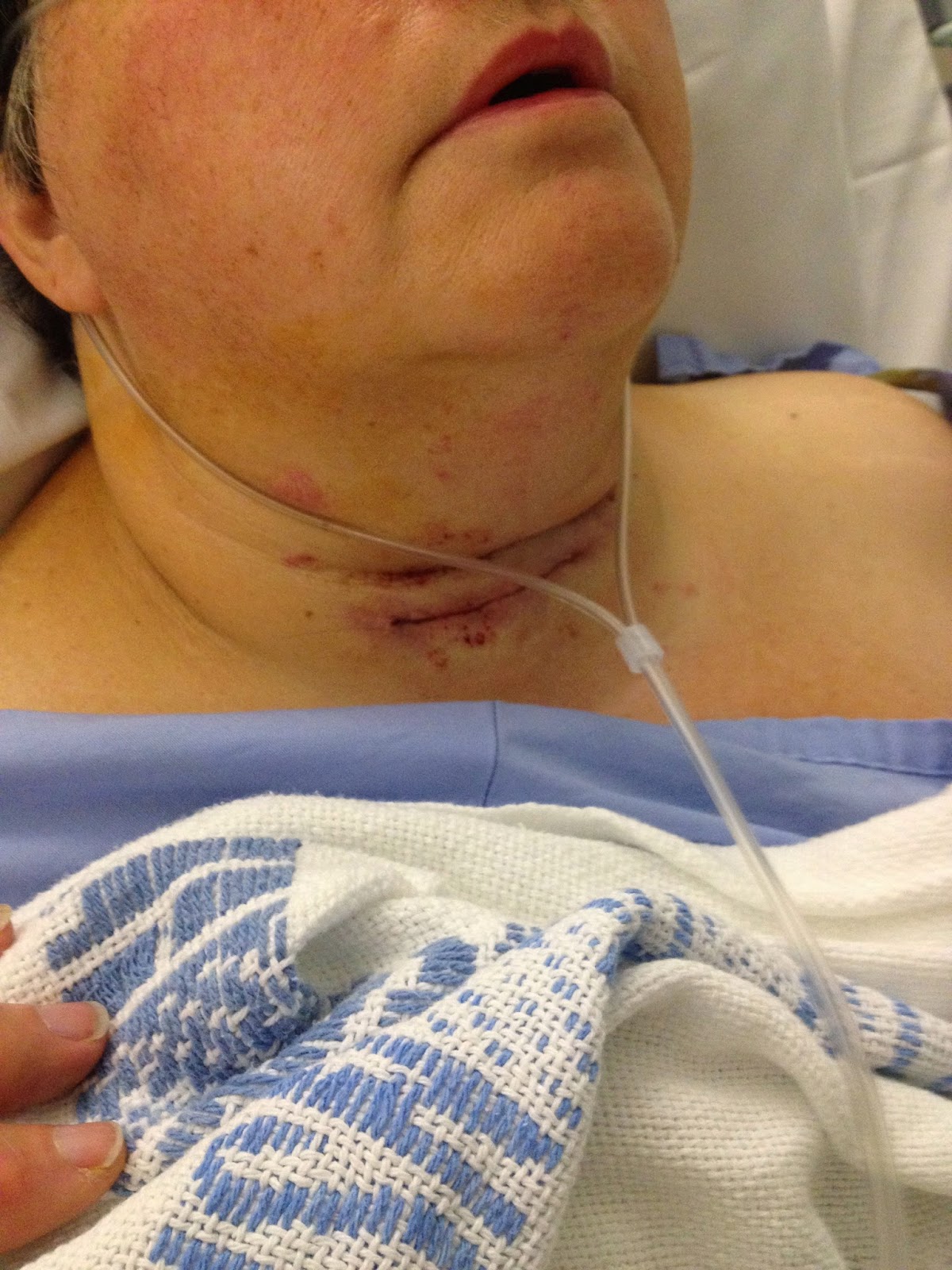 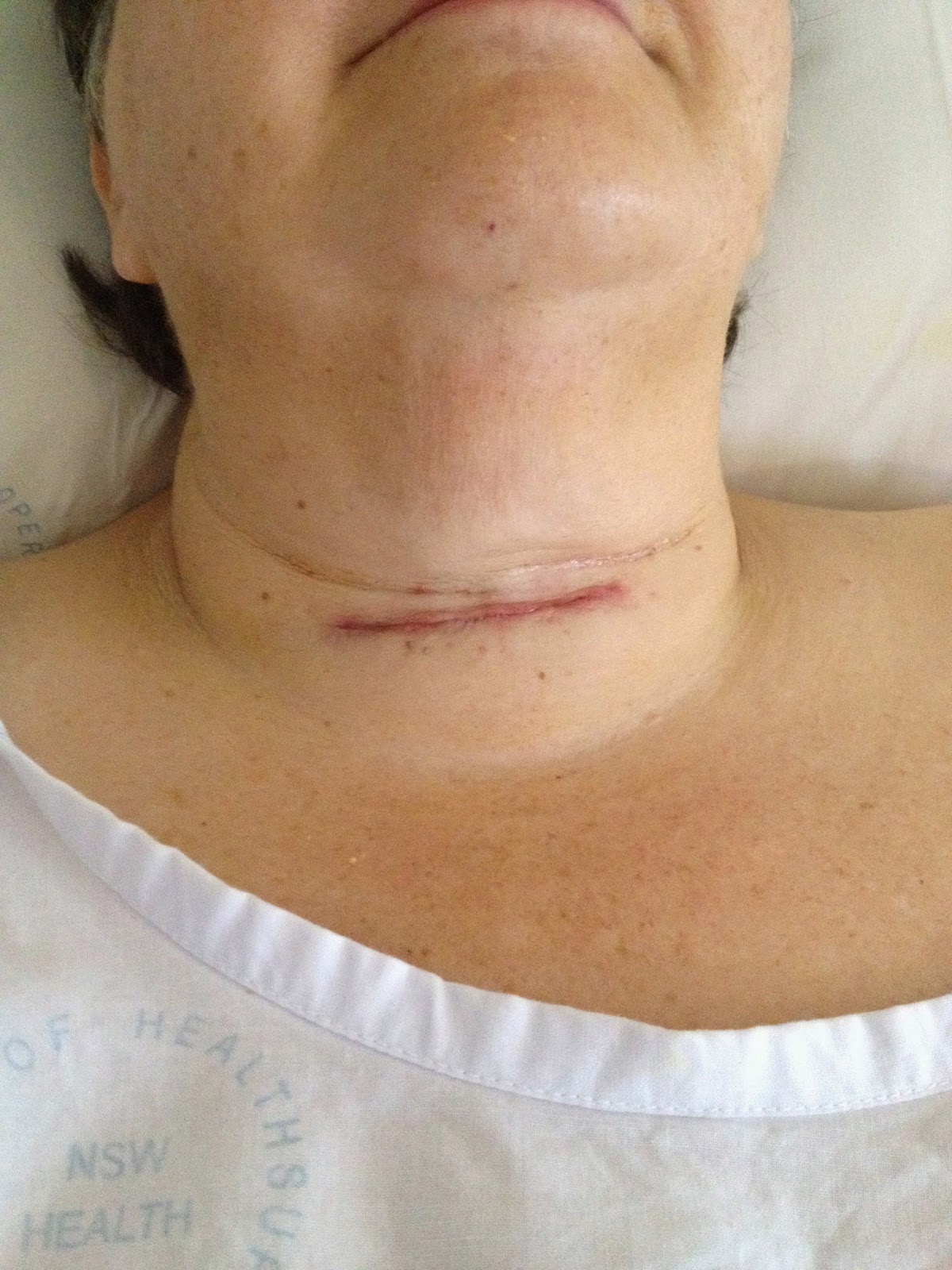