Yeah ok, get off the floor and stop the laughing.  As if I am ever likely to turn into a gym junkie!

As part of my seemingly never ending cancer treatment I am now pumping iron... directly into a vein! So the story goes after the Radioactive Ablation in February 2013 my iron levels have continued to sink.  I've had every test known to man to work out whats gone wrong, all with no definitive result.

Initially the GP thought it was a consumption issue. I simply wasn't eating enough green leafy veg and steak.  But I thought I was.  I increased consumption and the only thing to rise was my bad cholesterol!!!    So after about 10 months he added oral iron tablets into the mix  (just what I needed, yet another tablet!!!)    6 months later... the iron was still dropping so I was referred to a gastroenterologist.

I saw him and he decided I needed a endoscopy, colonoscopy and a natty little camera inserted into my belly to plot the course of my gut to find out what was wrong in there that iron just didn't like being around.  Of course He also extracted a HUGE amount of cash from my wallet which, once again, my private health insurance failed to cover.   The camera came back with some magnificent pics of my intestine. Pristine!   Absolutely smick!   I saw them, my guts look great!!!  So this ruined his belief in that I had Coeliac disease, a new cancer, ulcers or intestinal bleeding.   His final report read something along the lines of  "it's obviously a consumption issue".   So that was a total waste of time and money and back to the GP I go.

All the time my iron levels are falling even lower and as a result my energy levels are heading southward at an equally alarming rate.   The "normal" range for which I was aiming is between 15-45.  Prior to meeting up with the Gastroman I was running at between 6 and 8.  So back on the steak I went. This time with daily double doses of iron in tablet form.  Naturally you would expect a rise, however slight.... but no.  I dropped for 6 to 4 and finally to 2.   Getting out of bed, walking to the car, preparing a meal, working all became such a burden that I was perpetually exhausted (and grumpy).

Neither I, nor the GP could work it out.  I found a line on an American website that said Radioactive Ablation messes with SOME peoples blood, but nothing more than that.  The post said it was an "uncommon side effect"  but neither the GP or the Gastro believed it.

So I spoke to my friendly pharmacist about it.  He suggested I speak to the GP about inter muscular iron injections.   I did, but the GP gave me three reason NOT to do it.  1.  It can cause immediate heart problems and his surgery does not have a resus room and   2. It can cause horrible skin staining 3.  inter muscular is not a good way of absorbing iron.  It has limited efficacy.  So in desperation he wrote to the Mater Hospital asking them to triage me for an urgent iron transfusion/infusion.   But they refused.  As I was not in active cancer treatment I did not fit their criteria.

My GP is a real  trooper.  He found a private haematologist here in the Hunter who would see me.  I just had to wait 3 months for an appointment!!!   I saw him and he, unlike Gastroman charged me a reasonable amount and 7 days later I was sitting in the Mater getting hooked up to a bag of fluids.  Yes, the Hospital that wouldn't do me 3 months earlier, were now happy to have in in their facility.

I was hooked up at 8.30 am and unhooked a bit after 2pm I think.  There were 8 chairs and 2 beds in the room and they were on high rotation all day.   I was there the longest and chairs either side of me had 3 and 4 people thru them while I just sat and sucked up the goodness.  On the central storage rack I counted over 40 IV set ups in the morning.  When I left there were probably 4 or 5 still hanging there, yet there were still about 12 people in the waiting room!  The staff were on the go all day.

Some weeks on now and the results has been....less than staggering.  In fact I have not felt any relief at all BUT it will take more than one transfusion get me back to "normal".   The Haemo man has decided that "occult gastrointestinal bleeding" is the cause.  What that means is the Haemo man disagrees with Gastroman.  Thing is I really don't care WHAT is causing it, I just want to feel normal again!!!    The doctors are expecting great numbers, as am I.... but only time will tell.

As per usual a few images but be aware some might find them confronting. 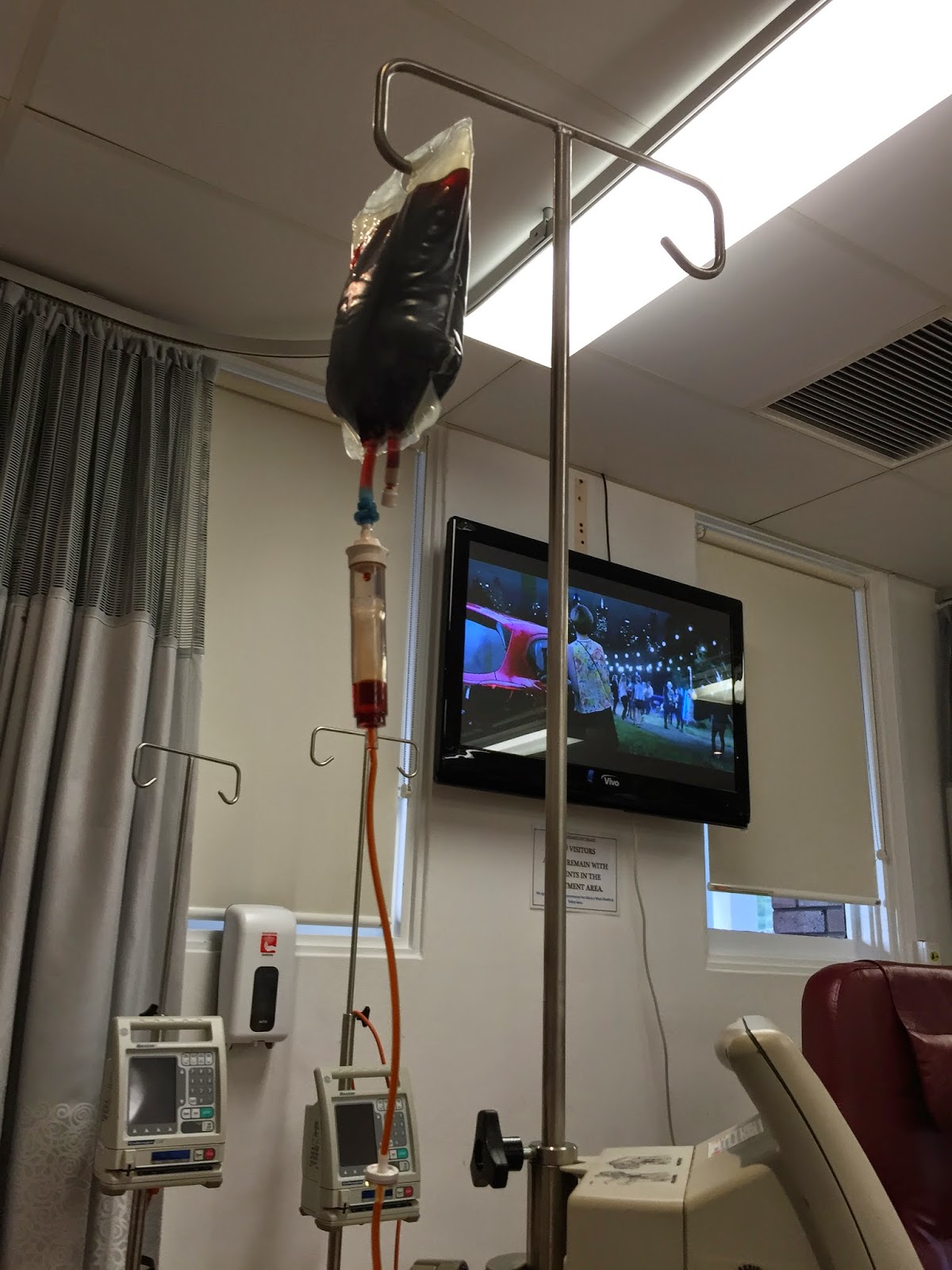 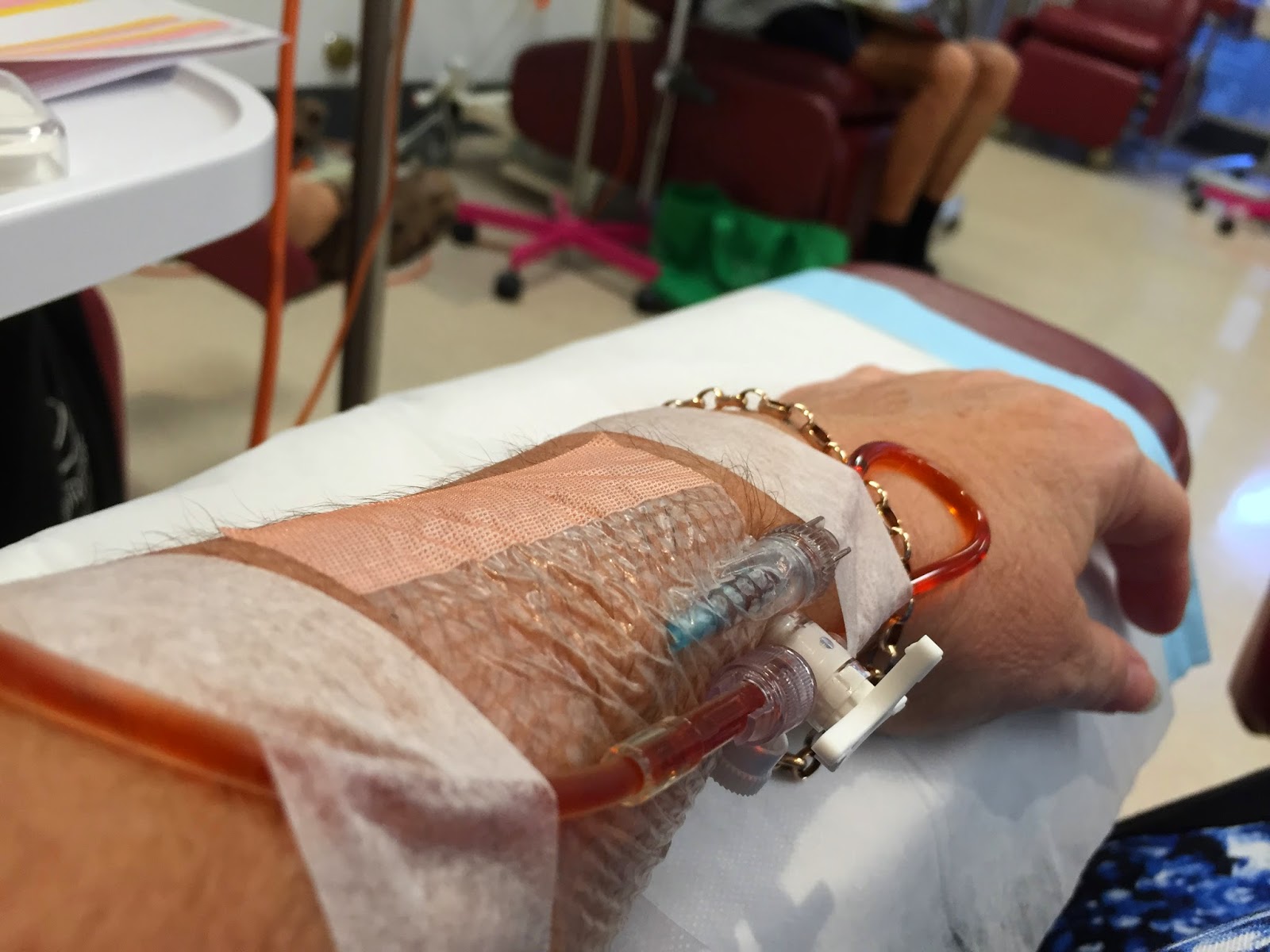 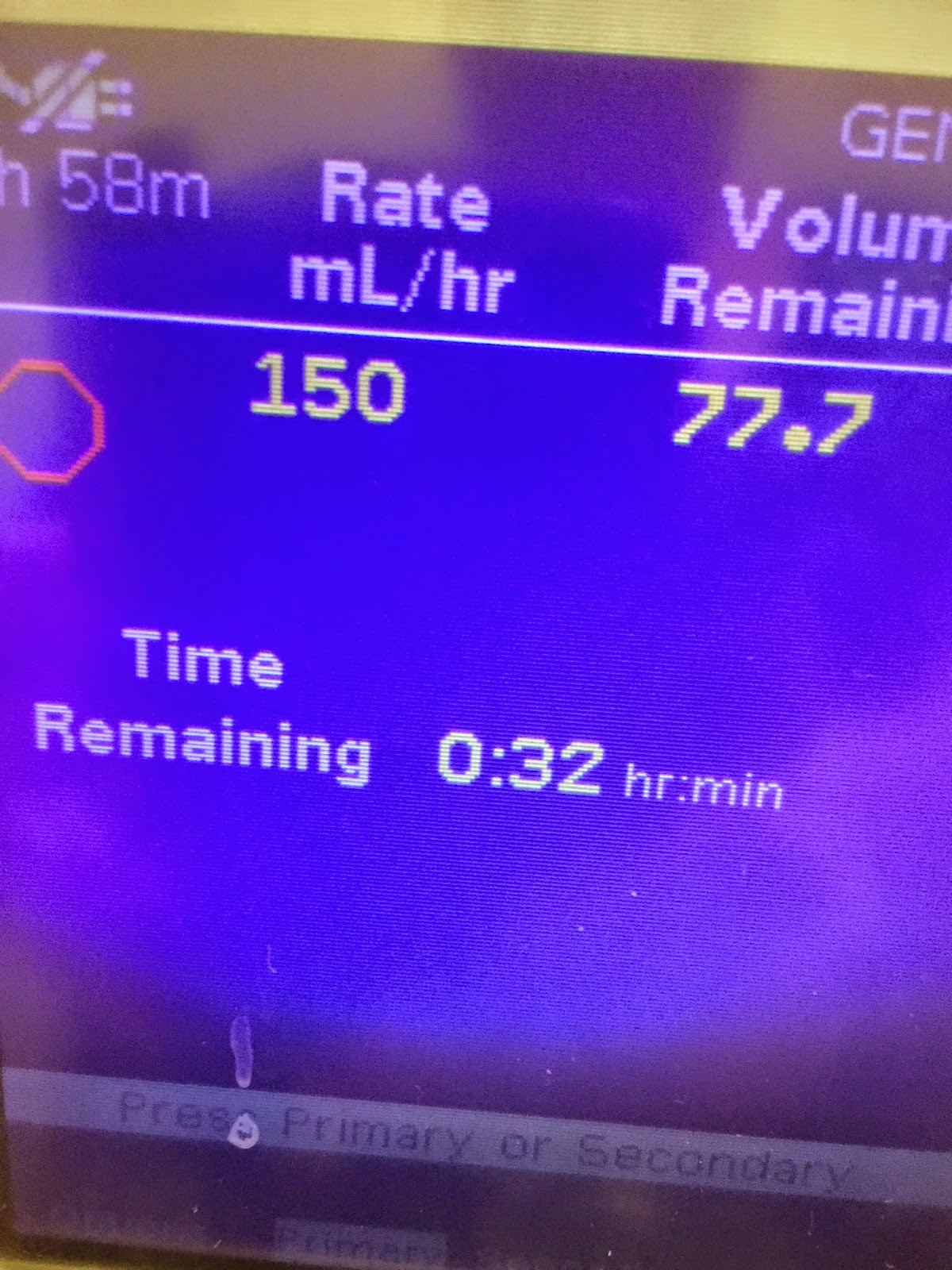