I met Jenny in 1992 when I was transferred from Newcastle to Belmont Police Stations.  Jenny had been transferred there just a few weeks before me.  She had previously been at Gosford Police Station, having joined the Police Force as a civilian in 1986.

We clicked, something clicked and she made the transition for me easy.  I'm just 3 months older than Jen, we both have one female sibling and similar upbringing.  Similar education but varied interests.  As the years rolled on the friendship grew. Most of the time we worked in the same building, but from time to time Jenny was swapped around to other stations.  That just meant we talked by phone or email instead!!  We celebrated special days together. Birthdays, Christmases, Easter and any other reason to a shared meal or party.

Jenny loved netball. I HATED netball.  I love Australian Maritime History, she thought that was naff!
Jenny read Mills and Boon, I love colonial history.  Jenny loved "Take That" magazine, I was more a "Country Style" kinda girl.   We both enjoyed reading though. So I helped Jen write her netball annual reports and she proof read my Uni assignments. It was a fair swap. I taught Jenny how to play backgammon and she became a great player.  Many many lunch hours were spent locked in backgammon battle!

In 2007 Jenny told me she had tingling in her left hand. She had already had carpel tunnel surgery on her right hand so I nagged her to go see the doc and get her left wrist fixed.  The nagging took quite some months, but eventually she went to see her GP and some tests were called for.  Days later she was diagnosed with Breast Cancer.  Well that blew everyone away!  Totally unexpected.  The mass under her arm was affecting the nerves that caused the tingling effect in her fingers.   Treatment began.

Over the years Jenny had multiple surgeries, multiple injected chemotherapy, multiple radiation doses and then a couple of years of oral chemotherapy. She had a port seated into her chest, her skin was burnt by radiation and she lost her hair a number of times. Jen actually looked good bald!  Wigs are provided but they are very hot and she preferred to go without.  When she was well enough she worked.  She continued to work because she loved work. She enjoyed people, she was a real people person. She had a great memory.  I could say to her "what's the name of that bloke who always wears a flanno to court?" Or "that cop that transferred to "insert obscure station here""  and she would be able to recall names.......in an instant!   She knew the names of every co-workers kids.  She remembered everyone and recalled everything!!!   And she loved kids!  Kept stamps in her drawer to ink up any kids that came in the station.

In December 2012 she found coming to work just too hard and she sought a medical discharge.  Just 6 days after she ceased coming to work she was taken to Gosford Hospital in uncontrollable pain.  The cancer had eaten its way into her hip and she needed URGENT surgery to help control the pain.  It took 9 days for her to make it to the top of the URGENT list! She spent her last Christmas and Boxing Day in horrible pain. Every time she moved a fraction of an inch she would scream in pain. The morphine couldn't hold it. No matter how much Morphine they hit her with it never  touched the pain she endured.  After surgery the pain in her hip became controllable by drugs.  She smiled again.  She never complained about the pain, never said "it hurts",  never spoke of it.  But when it was really bad she would yell and howl.

The medical team came to a decision about ongoing care and after a 5 day wait a place became available in a Rehab facility. The intention was to get her walking again. She was given the news to pack up her gear as she would be collected by ambulance and swifty moved on in 30 minutes.  She rang me at work, she was so excited.   15 minutes after that news she was told the cancer had progressed to her brain and she would not be going anywhere.  She rang again, she was devastated.  Instead she would be undergoing 10 days of intensive Radiation.  The cancer had already spread to her lungs, spine, femur, hip, liver and skull, but in Gosford  Hospital tests revealed it had also spread to her brain and there was some suspicion it had gone to her oesophagus.  She was unable to eat more than pea sized bites and everything had to be cut up for her.  Even then she had trouble keeping food down.  Meal time with Jenny was horrendous.  Everything had to be cut up into tiny pieces for her as she had lost a lot of fine motor skills.  She would struggle to eat more than a few spoonfuls and then the majority of that would come back up anyway.  I don't care to remember how many times I sat with her, cut up her meals, handed her a purple spew bag and then took the walk to the fluids bin to dispose of them.  She seemed to be able to keep KFC and Ice Cream down. So as the new year began her KFC consumption rose.  At least she was eating.  She had already lost about 60 kilos.

Jenny undertook that last round of Radiation and again, her hair was gone.  In Gosford Hospital she met a wonderful woman called Gail Scott and they became good friends.  Jenny was upset when Gail finished her radiation and went home,  she really missed her, but they kept in contact.

Jenny was home for 17 days before her breathing became compromised and at noon on Sunday 3 March she was taken by ambulance to Wyong Hospital.   At midnight Doctors tried to drain the fluid from her lungs, but fluid forms in pockets and they could only remove about 200mls from what could have been as much as 4 litres.  At 2am the procedure was finished and she was sitting up in bed, but her breathing was laboured.  She had already told the doctors that she did not wish to be resuscitated.  She had made her intention clear.  Cindy sent me a message at 2am that Jen had sent her home, but that things weren't looking good. In fact the term the Doctor used was "grim".

The following morning I arrived at Wyong Hospital with Jenny's parents.  We sat with her all morning. Jenny's friend Cindy and Karen left for a while. Cindy had been there for most of the morning. She may well have left at 2am, but I know she was back there not long afterwards! Karen had just finished night shift. We had had a discussion that one of us would stay all day and all night until things changed.  I'd had the most sleep so I stayed and the others tried to get some sleep.  At 2.20pm Jenny's conditions changed markedly and I sent the girls a message to return asap, but Jenny left quickly.  At 2.35 pm Jenny passed away. Her mother, father and I were by her bedside.

We three girls, mum and dad sat with Jenny for a couple of hours.  Jenny had never mentioned what she wanted after her death.  We all agreed on a cremation as once about 17 years ago she had commented to me that that was "for her".  She had never been mentioned again..... to anyone!  Karen went thru the phone book and a list of funeral homes were given to Pat.   Pat's sister and brother in law arrived from Sydney and at 5.30 pm we all left the hospital.  We all had tasks.  Mine was to locate the Police Chaplain. I had already sent a message to the Commander at Lake Macquarie and rung a number of Jenny's special work friends.  When I read back now the message I sent to the boss, I  wish I had worded it differently.  But that's the past now and I can't change that.

Jenny had a MASSIVE funeral yesterday.  Over 160 of her friends, family, netballers and companions turned up.  I spoke.  This is pretty much what I said....

When Pat asked me to say a few words here today I really struggled with it.

I thought about sharing stories of Jenny and our 20 year friendship.
About all the fun times and later about that which consumed her life.
About that crazy trip to Sydney for her first MRI.
About visiting her in more hospitals than I care to recall.
About our Saturday joyrides in the big red wheelchair.
Or about sitting by her side and counting down how many hours till her blood transfusions ended.

I thought I could speak about her long battle with the insidious disease of cancer that was raging out of control in her body.


OR about how she never once complained or asked “WHY ME?”


It was then I realized I wanted to say THANK YOU.

But I especially wanted to thank someone most of you will never have met and probably never have heard of.

Jenny and I met Gail on December 29, when late in the evening we gatecrashed her previously peaceful room in M2 at Gosford Hospital.
Gail and Jenny shared that room for the next 5 weeks.  24 hours a day, 7 days a week.
Gail became Jenny’s arms and legs.  Helping her with her meals, fetching drinks and towels and blankets.  Encouraging her to try and walk again.
Gail was an inspiration to Jenny and Jenny became very sad when Gail was discharged.  But their friendship continued by phone and email and facebook!

So THANK YOU Gail.  The last weeks of Jennys life were all the better for having known you.

I consider myself incredibly fortunate to have been able to say goodbye to Jenny in person.  So there is nothing more for me to say here, but I know Cindy has a tale or two she’d like to share.

So Jenny is gone and life for family and friends has changed forever. One thing that has come to light since her passing is that her friends were kept in compartments.   Karen was the "saturday netball friend",  Cindy was the "thursday night dinner and sunday markets friend" and I was the "weekday work" friend.  I had met Karen once before the day Jen died and I had spoken to Cindy before Jen died, but had never met her. Karen and Cindy had never met either!    We have theorised why Jen kept us all apart...... but we are all in constant contact now and Jenny is the glue that brought us all together.

Last Saturday night we celebrated what would have been Jenny's 52nd birthday.  Her parents Pat and John, sister Sue, Sue's friend Donna, Cindy and myself went to Club Mingara and had Jenny's favourite meal, Calamari. It was an odd night, but one we all enjoyed.... and Jenny would have too. 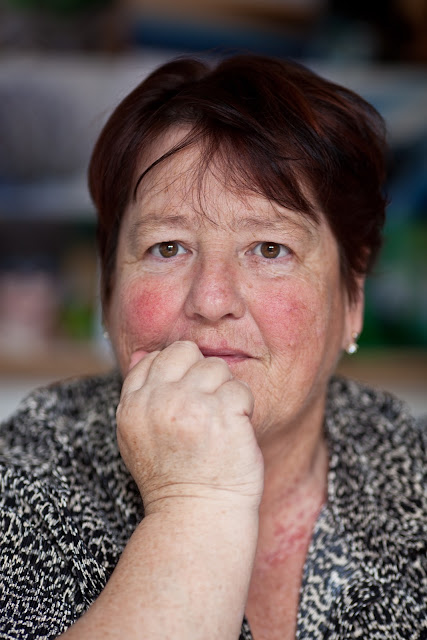