So you know how I wasn't getting to learn about the makeup of Mr Lumpy Bump until 16 July......well that changed.  On 12 July my nephew sent me a text to ring his mum straight away.  She had received a call from the surgeon and he needed to talk to me urgently.  I had had two missed calls on my mobile, but as the number was blocked I couldn't call back.  So I rang the Doc and he is all wordy and  apologetic that he has to tell me some bad news over the phone.  Mr Lumpy Bump is not a benign follicular neoplasm, he is a papillary carcinoma and I need further surgery PRONTO.  Pronto as in Tuesday July 17.  Yes, he still needed to see me monday, some pre op stuff and some form signing etc, but there would be slicing and dicing the following day.

Well, this is soooooo not what I had expected.  Blew me away. When I rang him I really thought he was ringing the change my monday appointment time, not tell me the news I had never expected to get.   I was a bit lost for the moment and due to the environment I was in, it was hard to hear everything he said.  I was waiting to get a haircut when all this happened and when I eventually sat in the cutters chair I had no real idea what was ahead of me and I have no way to articulate what I wanted done to my locks.  I exited the hairdressers with much less length than I expected, but it will grow back.

When I got home I had to tell a few people about what was happening next and that included my two office buddies Louise and Lexi.  I rang the boss first and asked for him to give me half an hour to tell the girls before it became common knowledge at work.  I also rang my buddy Jen who is in hospital at the mo fighting the good fight against breast cancer.  I wasn't sure whether to tell her or not, but she was going to find out sooner or later, so it was better coming from me. I rang a few special folk and much much later in the evening I put the news up on facebook page. My facebook page is private so only selected people can see what I write.  So many people have responded and I feel bad that I just haven't had the presence of mind to respond.  You see for the first time I have not felt positive about this.  I am apprehensive about op number #2. I fear carrying on like a pork chop in recovery again and that feeling when all I wanted was ice that I thought I would die if I didn't get a sliver of ice in my parched mouth.

Knowledge is power and I know I will be feeling much more positive after I have a chat with the surgeon tomorrow, but that doesn't help how I feel today.  Worse still I have soooo much housework to do. Loads of washing.  I need to clean out the fridge and tend the veggies and I have no energy to do anything but sit on this stupid time wasting machine feeling miserable.

So I'm thinking this is so negative I will never post it.  I'll just save it as a draft and see how it goes.

Well I held the above post in "Drafts" until today.  Here comes part 2. Hang on to your hat!!!

I saw the surgeon on 16 July and went to hospital on 17 July only to be again bumped out of the surgical list due to lack of time.  Surgeon was very concerned that I didnt get a cold and he'd have to postpone me again so he put me off work and back into home isolation for a fortnight.

On 31 July I arrived at the John Hunter Hospital at 6am and hit the Operating Theatre 1 at 9am.  The second operation was called a left hemithyroidectomy and took 96 minutes in total.  Just before I went in the Docs changed the consent form from WITH neck dissection to "blank".  I was a bit groggy and had no idea what this meant but later found out that they were going to try to preserve the lymph nodes.

I spoke to the doctors about the wrestle I had in recovery after op 1 and so they changed the drug they used on me...... and it worked a treat.  I woke up to Rebecca pumping morphine into my arm and ice into my mouth and the world was rosey.   There must have been some blood as I recall them cutting off my gown and I awoke washed and refreshed in a white gown, instead of the surgical blue.   Nice not to have blood caked in my hair this time!  It was early afternoon when I was taken up to the ward.

I had a two night stay this time.  Restful is not a word to describe hospital.  I was continually awoken for more blood tests or tablets or to check my drip or blood glucose levels.  The surgeons called around twice a day as well as the ward Residents and Interns.  It was pretty hectic and I was glad to finally be released.

One thing I hadn't reckoned on was the medication.  I came home on 20 tablets a day.  A mix of painkillers and antibiotics, but now, 11 days on, I am down to just 3 for the thyroid.  The daily blood tests end monday......well at least I hope they end monday.

Yes monday..... tomorrow.... an early start.  9.30 blood tests at the hospital followed by an 11am appointment with the surgeon.  Hopefully he will have a plan of attack ready for me for ongoing treatment and details on what was found in the other half of my thyroid.

In the second op the Doc reopened the initial wound and extended it.  In the process he straightened it up so I am very happy with the result. Looks good and is clean and a nice colour.  It is very sore.  It was probably this sore last time too, but I can't clearly remember.  That first op seems so long ago.

My boss has been excellent, ringing and texting and bending over backwards to make this easy for me. My friends have been supportive and helpful and the offers of assistance have been coming in thick and fast.  My nephew Russell has borne the workload.  Driving, shopping, lifting, gardening and doing all the stuff I can't do.   He's a good kid.

The Boss broke the "no flowers" rule and sent me an enormous bouquet.  What's a girl to do, but to take  photos of it!  Here are some! 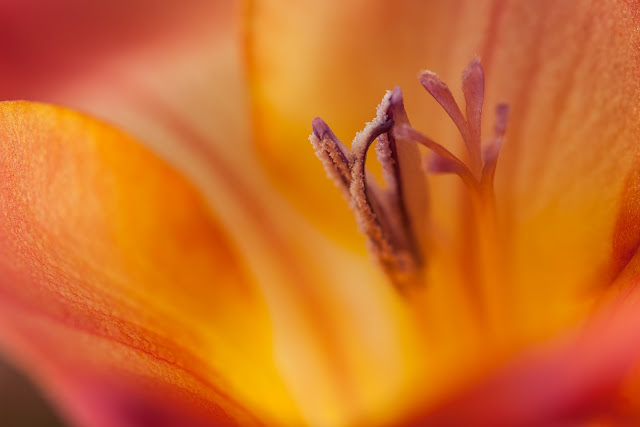 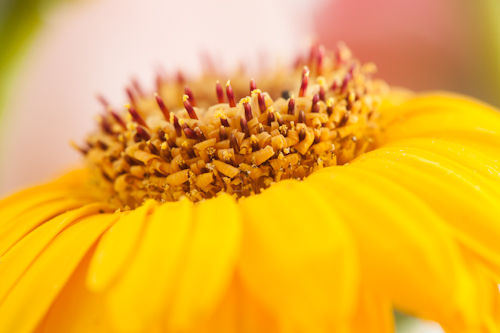 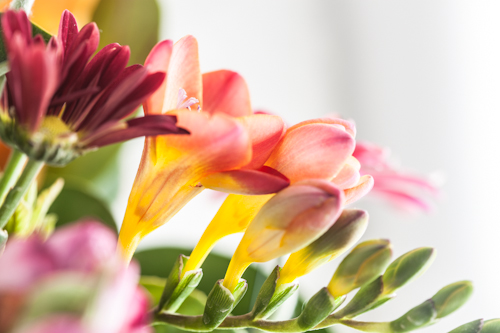